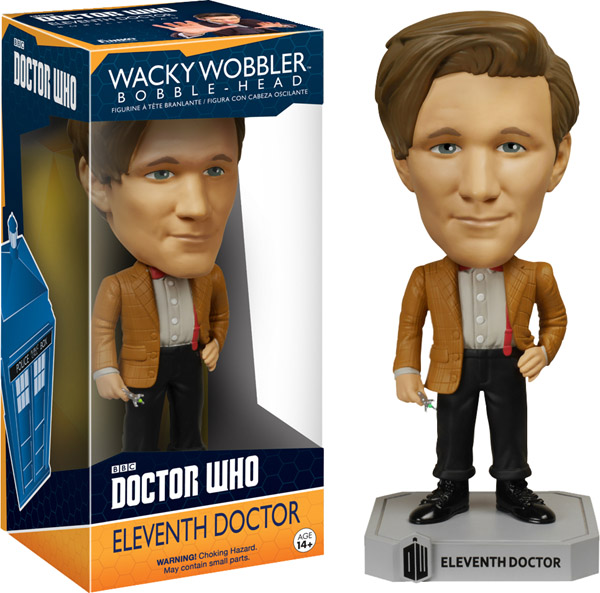 Bow ties are cool again with the Doctor Who 11th Doctor Bobble Head, although it’s hard to tell because that super-sized chin hides the coolness.

Based on Matt Smith’s Eleventh Doctor, this approximately 7-inch-tall Funko figure features everyone’s favorite madman in a box in his iconic outfit, complete with bow tie and suspenders. He’s armed with his sonic screwdriver and ready to join forces with the Doctor Who 10th Doctor Bobble Head to defeat the Daleks, save Gallifrey, and explain to River Song exactly why he felt compelled to bring Clara along for a joyride since he’s now a married man.

The Doctor Who 11th Doctor Bobble Head will be available August 2015 but it can be pre-ordered now for $12.99 at Entertainment Earth.

This awesome Doctor Who Electronic 11th Doctor Bobble Head with Light-Up Sonic Screwdriver is the first-ever Matt Smith Eleventh Doctor bobble head! You can expect an amazing Matt Smith-approved likeness as well as an action pose. If that isn’t enough to make fans squeal, the […]

Earrings are cool (so are bow-ties and Stetson hats) and these Doctor Who Sonic Screwdriver 11th Doctor Dangle Earrings will complement your outfit very nicely. Even if they won’t open doors and rewire circuitry. These earrings are modeled after the Eleventh Doctor’s Sonic Screwdriver and […]