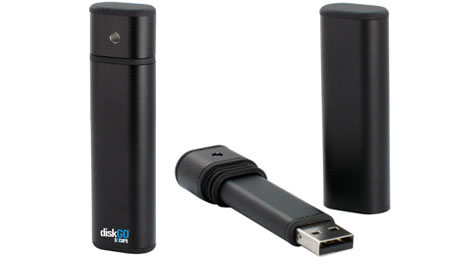 EDGE Tech Corp, the US-based company that gave us the 32GB USB 2.0 memory stick, has announced the DiskGO Secure Guardian Flash Drive – a storage device that exceeds the government standard for encrypting data with its 256-bit AES hardware encryption.

Not only is the GUARDIAN secure, but it’s fast—featuring dual-channel SLC flash with read speeds of 25MB/s and write speeds of 16MB/s.

The GUARDIAN also comes with an incredibly rugged anodized aluminum housing which withstands elements such as rough treatment, water, dirt and sand. Complex passwords are required for use; adding an additional layer of security.

Encrypting data with the GUARDIAN is 100% mandatory—the only option for storing files is in its encrypted section. An optional contact information feature allows for storage of information such as phone number and email address, in the event the GUARDIAN is misplaced.

EDGE Tech Corp, a U.S.-based supplier of portable computing products and storage devices, has announced the release of its DiskGO Flash Drive with an impressive 32GB storage capacity.

Cuddle up with Peter Quill with the Guardian Star-Lord Pillow and rest easy knowing this intergalactic hero is watching out for you. Chris Pratt’s Star-Lord, from the blockbuster Guardians of the Galaxy, is looking pretty casual as he keeps an eye out for trouble… and […]

I install a piece of software into each of my USB drives that asks for a password before the files can be accessed. To add more layers of security to your data, you can opt for the Personal Pocket Safe USB Flash Drive instead. This is […]