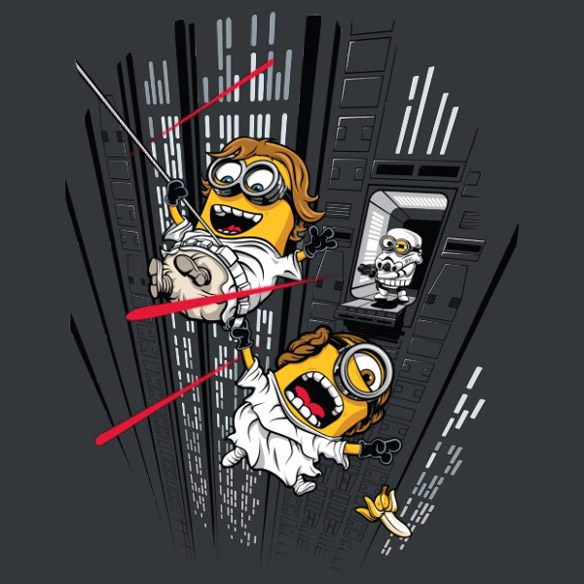 The banana is strong in this one. There were all kinds of minions in the Star Wars films, but the Despicable Escape T-Shirt brings us minions of a different sort.

When you think about it, it makes perfect sense for the little yellow guys from the Despicable Me films to wander into the Star Wars universe because they would feel right at home in a galaxy far, far away. After all, the stormtroopers were basically minions of Darth Vader, and even the Dark Lord of the Sith was a minion to the Emperor.

In artwork created by DJ Kopet, the Minions take over for Luke Skywalker, Princess Leia, and one lone Stormtrooper determined to keep them from getting away. Will our heroes escape or is that dropped banana an omen of the doom that awaits them? 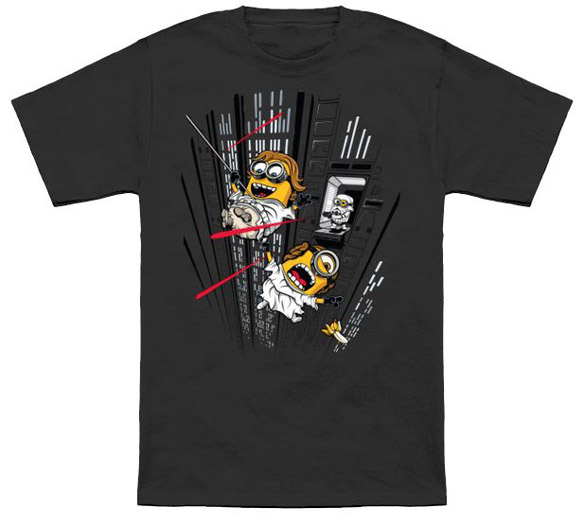 The Despicable Escape T-Shirt is available for $19.95 at NeatoShop.

The minions from Despicable Me are pretty darn cute. So they are the perfect way to introduce kids to a toy from the past. This Despicable Me View Master does just that. You get a viewer that looks like a minion and 3 reels. Even […]

Minion Batman apparently has despicable aim on this Despicable Bats T-Shirt, or maybe the little prankster meant to do that. When the Minions aren’t helping Gru raise the girls or defend the world from villains, a couple of them do their own superhero thing. Hopefully […]

The Minions Have The Phone Box T-Shirt

Those mischievous Minions from “Despicable Me 2” are getting ready to enter a whole new universe of trouble on the Minions Have The Phone Box T-Shirt. Forget about Angels getting their stony hands on the Doctor’s TARDIS because Gru’s yellow-hued helpers could destroy all of […]

The best part of the Despicable Me movies are the minions. And if you love minions and can’t get enough, this Despicable Me 2 Laughing Minion 70cm Bop Bag will be a welcome addition to your collection. Punch this minion around and hear it giggle […]

In the Despicable Me 2 Operation Game Minions operate on Minions. It’s the same classic skill game of Operation that you love, but now with minions. Operate on Stuart to remove the unicorn fluff or fix his nutty noggin and his toxic tongue. If you […]