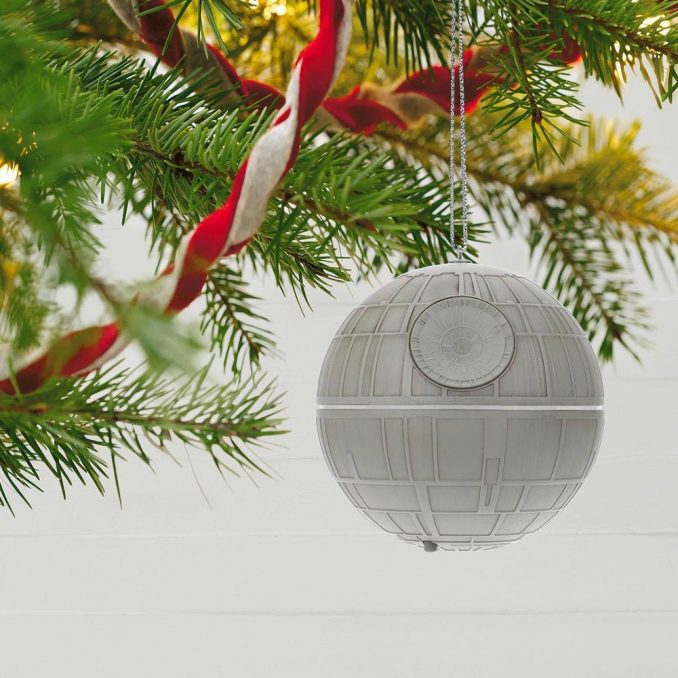 That Death Star Tree Topper is pretty awesome, but perhaps you already have a Christmas tree topper that’s a tradition. That’s okay because you can get this magnificent Death Star Ornament With Light and Sound instead!

This Hallmark Keepsake ornament isn’t just remarkably detailed when it is fully armed and operational, it also features a light show as well as exciting sound from Star Wars: A New Hope. Perhaps it will also protect the presents under the tree from any grinches that fear the Empire’s massive battle station. It comes packaged in a nice box for easy gift giving and for safe storage between seasons.

Purchase the Star Wars Death Star Ornament for $39.99 from Hallmark. You might also want to get the X-Wing Starfighter Ornament as well so you can recreate the Battle of Yavin on your Christmas tree. (These ornaments can be connected together to unlock amazing interactive performances.)

Serenity is a distinct and uniquely designed spaceship, as you can see in this impressive Firefly Serenity Hallmark Keepsake Christmas Ornament. Fans of the Firefly television series generally have a great appreciation for this vessel, so it should come as no surprise that this isn’t […]

Christmas is often a time for nostalgia, as you think back on past holidays when you were growing up. If your childhood included stuffing quarters into coin-op arcade games, this Donkey Kong Hallmark Keepsake Ornament will help invoke those wistful memories. Looking just like the […]

The Legend of Zelda Link Ornament

Not only does Hallmark Keepsake The Legend of Zelda Link Ornament look awesome, but it can also get your nostalgia racing when you hit the button and it plays the classic 8-bit theme song from the original Nintendo game. Created by Hallmark Keepsake Artist Jake […]

Fans of the CBS All Access series “Star Trek: Discovery” will want to get this splendid Star Trek: U.S.S. Discovery Christmas Ornament to hang on their tree. All the details will make it stand out from the rest of the ornaments on the tree, especially […]

We already showed you the Star Trek Discovery version, but for many Trekkies, nothing beats the Original Series. They’ll want to hang this new Star Trek U.S.S. Enterprise Metal Ornament on their Christmas tree, or perhaps collect them all. Constructed of metal and intricately detailed, […]

I remember one of the treats that I always looked forward to during Christmas was gingerbread cookies. Sometimes my mom would make them in the middle of the year, but she uses more frosting than usual and dresses up the cookies in various “outfits,” if […]