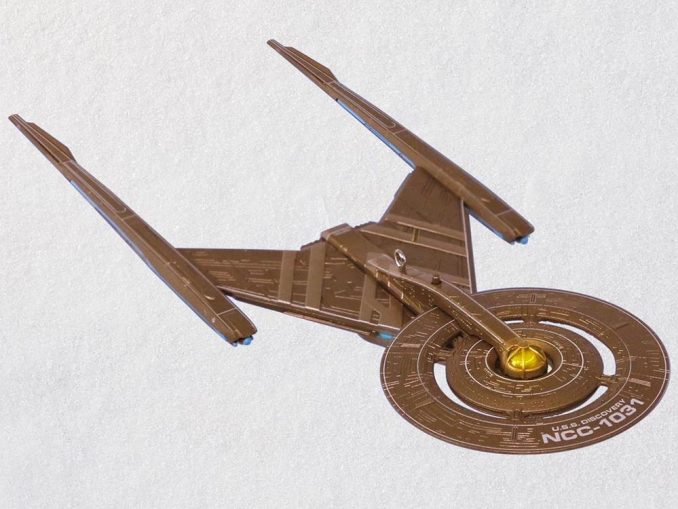 Fans of the CBS All Access series “Star Trek: Discovery” will want to get this splendid Star Trek: U.S.S. Discovery Christmas Ornament to hang on their tree. All the details will make it stand out from the rest of the ornaments on the tree, especially when you press the button to make the ship light up.

This Hallmark Keepsake ornament is an officially licensed Star Trek collectible. Like other Keepsake ornaments, it comes pre-packaged in a nice box to make for protective storage or easy gift-giving. It is over 7″ long and comes with the batteries for the light.

The U.S.S. Discovery™ (NCC-1031), a 23rd century Crossfield-class ship, becomes one of the most important weapons in the war between the Federation and Klingons as the crew journeys across the galaxy. Based on the CBS All Access series “Star Trek: Discovery”—which transports viewers to a time before the familiar five-year mission of the original Star Trek™ series—this Christmas tree ornament features the namesake vessel that embraces the same ideology and intrepid legacy that has inspired generations. Battery-operated light feature includes three replaceable LR41 batteries.

The official Christmas countdown has now begun! I always begin counting down the days when Christmas is just a hundred days away. Aside from getting a much-deserved break from work, it’s the perfect time of the year to get together with friends and family and […]

Make decorating the tree this year more of a family event. Get everyone in the whole clan to help out over warm mugs of hot chocolate and eggnog, and bond as you share stories and reminisce about the good, old days while hanging up the […]

Geekalerts has shown you several interesting plush toys from Giant Microbes in the past, and now you can decorate your Christmas Tree with things like the Common cold, E.Coli, Amoeba, Kissing Disease, and a Brain Cell. The Giant Microbes Christmas Ornament Sets are both entertaining […]

I remember one of the treats that I always looked forward to during Christmas was gingerbread cookies. Sometimes my mom would make them in the middle of the year, but she uses more frosting than usual and dresses up the cookies in various “outfits,” if […]

It’s never too early to buy an awesome geeky ornament for your Christmas tree. This Doctor Who TARDIS Christmas Ornament will be the focal point of your tree this year. You better get this one now since it is sure to be a hot seller. […]