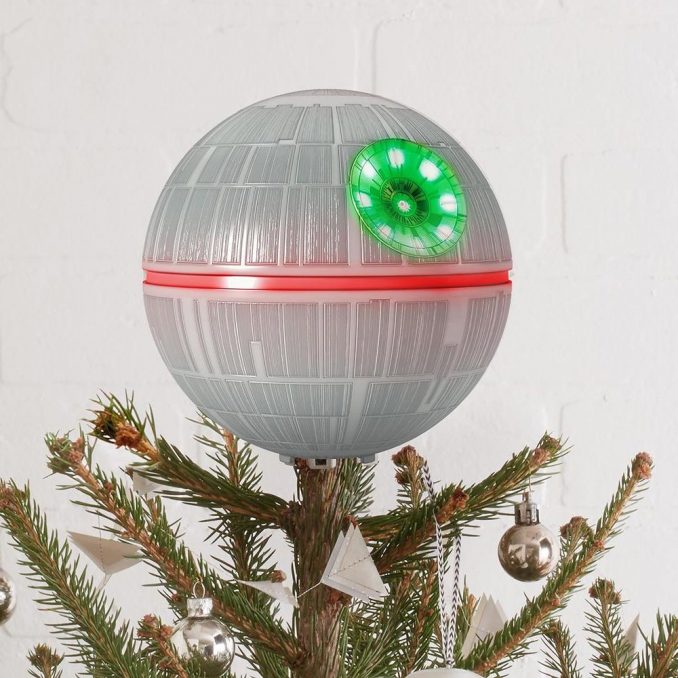 Does your family ever have the difficult choice between an angel and a star for a Christmas tree topper? Get this new Death Star Christmas Tree Topper, and it will always be an easy decision. Not only does it look awesome, it even has magic lights and sounds.

Simply press a button on the remote to illuminate this Imperial battle station, or have it play the Star Wars: Main Title and The Imperial March. It measures about 6.5″ in diameter, making it a great size for a typical Christmas tree.

That’s no moon—it’s the ultimate tree topper for any Star Wars™ fan. Expertly crafted to resemble the Empire’s armored space station, this Death Star’s design won’t pull you in with a tractor beam, but it will capture your attention with its awesome light and sound features! Included remote control features the iconic Imperial insignia crest.

Buy the Death Star Tree Topper for $99.95 from Hallmark.com. Also available at ThinkGeek.

Forgo with the traditional Christmas tree topper and look for something more your style; make it a Star Wars Christmas! This Yoda with LED Light Saber Tree Topper will go perfect with your Yoda & Darth Vader Stockings, Yoda Light Set, and Boba Fett Christmas […]

Most people like to have a star on top of their Christmas Tree or an angel. Star Trek geeks however, will want to top their tree with this Star Trek Spock Tree Topper. It brings logic, not joy to the world this holiday season. Let […]

The Super Mario Star Tree Topper makes your Christmas invincible and adds some Super Mario flair to your holiday festivities. Now your tree is a part of the Mushroom Kingdom. Don’t forget to deck it out in Mario themed ornaments too for the ultimate Mario […]

If your full-figured, triangular Christmas tree were to go on a diet, it might look like this Fashionista Christmas Tree.

Top your tree with this Star Wars Clone Wars Gold Yoda Star Lighted Tree Topper this year and let the Jedi master stand guard over your Christmas tree. Now Yoda will be a part of Christmas, always watching over you as if you were training […]

Deck the halls with this Star Wars Lighted Darth Vader Tree Topper and Santa will be impressed. You may even get extra gifts. This 12″ Darth Vader tree topper with LED lightsaber will bring a new hope to Christmas. It has a programmed timer that […]

If you read the Wireless LED Christmas Tree Balls with Remote post here at GeekAlerts, you probably also remember the problem with the separate battery pack. With these new dimmable Christmas tree LED candles, each studded by hand with sparkling Swarovski crystals, you won’t have […]

Don’t turn away. Don’t close your eyes. Don’t even blink. Or this Doctor Who Weeping Angel Christmas Topper will get you. It’s okay if your Christmas light blink as long as you don’t. This tree topper adds some Doctor Who menace to the top of […]