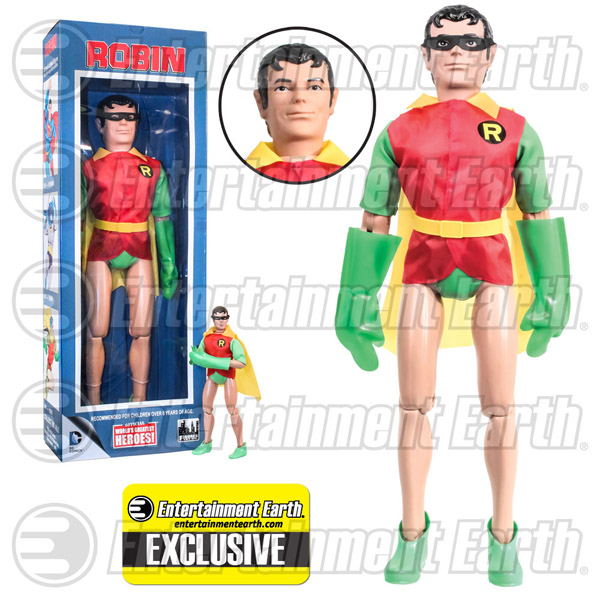 Inspired by the original Mego action figure that came out in the 70s, this 18-inch-tall figure features a real cloth uniform, removable mask, and those funky oven-mitt style gloves that look more suited to baking a cake than bashing bad guys. The 8-inch-tall Robin isn’t included; he’s just in the pic for a size comparison.

The figure is part of a limited edition collection consisting of only 200 pieces, and the removable mask version of the character is only available at Entertainment Earth.

The DC Comics Retro 18-Inch Robin with Removable Mask Action Figure will be available August 2015 but it can be pre-ordered now for $119.99 at Entertainment Earth.

Harem pants are all the rage these days. I’m personally not very fond of the trend, but it’s hard to say no to them if they come in the form of these Pic Nic Pants. I don’t think these were designed with fashionistas in mind […]

Robin has never looked so…sexy. Probably because he’s usually not a cute girl. This Women’s DC Comics Robin T-Shirt With Cape And Eye Mask will make a cute geek out of any girl. Just put on this shirt and the mask and your secret identity […]

Some love him, some hate him, but everybody has strong feelings about Batman’s son, and the DC Comics Robin 5 Damian Wayne New 52 ArtFX+ Statue features the angriest Boy Wonder to ever wear the mantle of Robin. Standing 6 1/2-inches-tall, this statue features everything […]

It’s not easy being a sidekick to the Caped Crusader, but at least you get this awesome and cozy Robin Retro Robe. This robe is made from 100% cotton and is a throwback to Robin’s vintage costume, with the color scheme and distinctive ‘R’ symbol. […]

Every good super hero has a sidekick and for Batman, it is Robin the boy wonder. Your Batman collection isn’t complete without Bruce Wayne’s ward. Display this DC Comics Robin 4-Inch Mini-Statue proudly, right next to the Caped Crusader. This statue features Robin having just […]