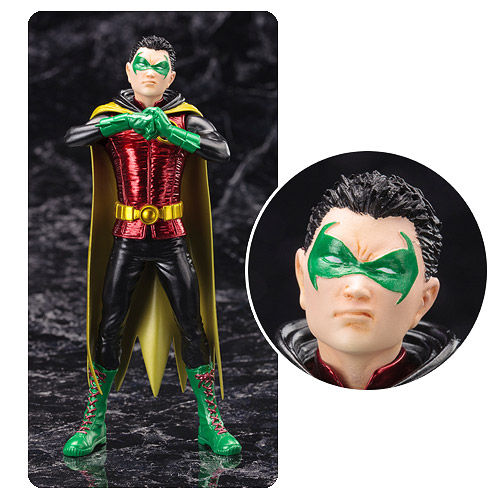 Some love him, some hate him, but everybody has strong feelings about Batman’s son, and the DC Comics Robin 5 Damian Wayne New 52 ArtFX+ Statue features the angriest Boy Wonder to ever wear the mantle of Robin.

Standing 6 1/2-inches-tall, this statue features everything that makes this Robin stand out from those who wore the mask before, including his unique spin on the Robin outfit and the brash, better-than-everyone-else sneer on his face. Even his knuckle-cracking pose lets you know this isn’t a sidekick to mess with. Like all ArtFX+ statues, Robin has magnets in his feet for extra stability on his included display base.

The DC Comics Robin 5 Damian Wayne New 52 ArtFX+ Statue will be available May 2015 but it can be pre-ordered now for $39.99 at Entertainment Earth.

The Dark Knight has had many sidekicks over the years, but none of them shook things up like his own son. The Batman Damian Wayne Robin Hoodie lets us remember the latest Boy Wonder to rise and fall while fighting crime at Batman’s side. Just […]

The son of Batman and man’s best friend are ready to clean up Gotham City with the DC Universe Robin and Ace the Bat-Hound ArtFX+ Statue 2-Pack. We’ve already seen one half of the Super Sons team with the DC Comics Super Sons Jonathan Kent […]

Your collection is not complete without this DC Comics Red Robin New 52 ArtFX+ Statue. He has his distinctive costume first seen in the New 52, with his complex black bodysuit with built-in red armor panels and reinforced boots. His outfit has a great metallic, […]

If you’ve ever wished you could punch like Manny Pacquiao or Floyd Mayweather, Jr., then you’d probably want to get your hands on the Knuckle Blaster Stun Gun. But don’t use it to win fistfights, because you’ll probably get sued or end up getting detained […]

GeekAlerts has shown you several ways to beat stress (Knuckle Pounder Meat Tenderizer, Stress Beater Brass Knuckles) with things that seem like they might be violent, but they really are just good old stress relievers.  The Knuckler Duster Corkscrew falls into that category.  Sure you […]