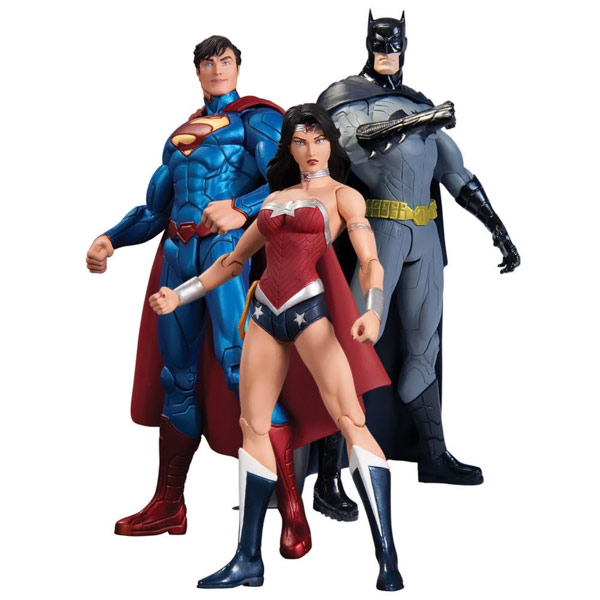 There are a lot of super-heroes in the DC Universe but the DC Comics New 52 Trinity War Action Figure Box Set focuses on the ‘Big 3’ – Superman, Wonder Woman, and Batman.

The iconic ‘Trinity’ of heroes features the last son of Krypton, the Amazonian princess, and the Gotham City vigilante with their New 52 looks, and you’d be wrong if you thought you could get these guys (along with a few others) by just grabbing the Justice League New 52 Action Figures because this box set features metallic paint on Superman and a different head sculpt for Wonder Woman. Supes also has a different head from his Justice League counterpart.

The DC Comics New 52 Trinity War Action Figure Box Set will be available September 2013, but can pre-ordered now for $44.99 at Entertainment Earth and $49.95 at the WBShop.com.

The heroes of yesterday join forces in the Trinity League Art Print, making plenty of fans wish Batman v Superman had happened a few decades earlier. Bruce Wayne, Clark Kent (without his glasses), and Diana Prince are ready to battle the villains of the late […]