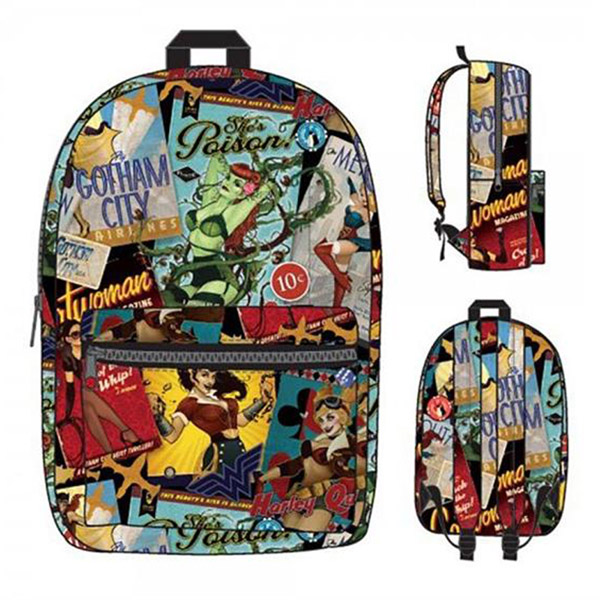 Want a backpack with explosive style? The DC Comics Bombshells Sublimated Backpack will toss plenty of eye-catching firepower your way.

The DC Bombshells are a big hit, with pin-up style versions of Catwoman, Poison Ivy, Harley Quinn, Supergirl, and Wonder Woman showing up as statues and posters. Now, the vintage take on those popular heroes and villains are decorating a backpack that can be used either for toting books at school or swag at comic conventions. I suppose you could also use it to tote books at comic conventions and swag at school, but why would you want to do something weird like that?

The DC Comics Bombshells Sublimated Backpack will be available later this month but it can be pre-ordered now for $34.99 at BigBadToyStore.com.

This A New Hope Sublimated Snapback Cap looks amazing. It is based on Tom Chantrell’s Style C one sheet and it is also sublimated so the colors are vibrant. One size fits most. It is a great way to show your love for Star Wars. […]

The Justice League takes to space to face the latest threat to Earth on the Justice League Space Patrol Sublimated T-Shirt… or maybe they’re just headed to the Milky Way to satisfy a sweet tooth. You never can tell with those superhero-types. The 100% polyester […]

The Man of Steel soaks up some rays to charge-up his batteries on the Superman Power of the Sun Sublimated T-Shirt, perhaps in preparation for taking on a foe that’s going to require his Kryptonian strength to be at full power. The 100% polyester t-shirt […]