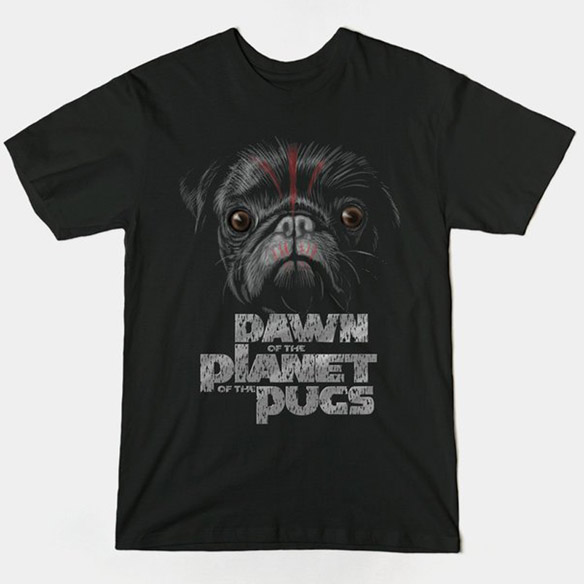 There will come a time when humans must make room for a new dominant species. Wear the Dawn of the Planet of the Pugs T-Shirt to show the proper respect to your future canine overlords.

Take your stinking paws off me you damn dirty ape! (said in my best Charlton Heston voice)

Let’s face it. You might say that to an ape but you’d never dream of making such a statement to your pug, would you? Just look at those eyes; that nose. We feed them when they want food. We take them out when they want to go out. We give them attention when they want attention. They’re already in charge. It’s just a matter of time before they realize that and whip out the war paint.

The image was design by an artist known as Bleee… which is what I like to imagine a pug war cry sounds like. 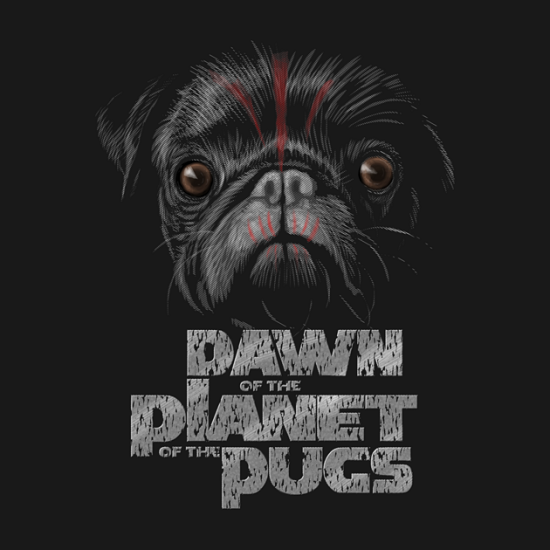 The Dawn of the Planet of the Pugs T-Shirt is available for $20 at Tee Public.

When guys fail to be recognized by their good looks, brains, and charming personalities, they might then decide to use cute dogs to get positive attention in public. But a much easier way and cheaper way to get noticed is to wear the Big Face […]

Owners of Pug dogs are very proud of their pets, judging by how many Pug pictures can be found on the internet. Those proud dog owners will want to drink from this Pug Mug and have a laugh at how cute it is. This square […]

Most people have an issue of some sort with a certain part of their body. Some people want to be thinner, some want a longer nose, and there are those who think their thighs are too big. Hitting the gym can solve several of these, […]

Some people create sweet music using the usual musical instruments, like pianos and guitars. Some bang out awesome beats using computer programs and software. And then there’s the minority that sniffles out some harmonies with the help of the Nose Flute. We all know the […]

If you get chills just thinking about this November 16, the opening date of the newest and final “Twilight” installment aka “Breaking Dawn Part 2,” cover up those goose bumps with the Breaking Dawn Part 2 Trio Comfy Throw. If you order soon, maybe you can […]

Indoor plants are nice, but usually boring and not something you tell your friends about.  The Dawn Redwwod Forest – Grow Your Own Bonsai Tree Kit is different.  The Dawn Redwood was thought to be extinct until 1946 when a specimen was found in a […]

Doctor Who Dawn of the Doctor Zombie T-Shirt

What would happen if a zombie found its way into the TARDIS? Even worse, what if that zombie was the Doctor himself? The Doctor Who Dawn of the Doctor Zombie T-Shirt takes us to that twisted and doomed dimension that blends Doctor Who and Dawn […]

The Dark Knight versus the Man of Steel but you don’t have to choose sides with the DC Comics Batman V Superman: Dawn Of Justice Teaser T-Shirt, and that’s a good thing because we all know Batman will win… or maybe Superman… or maybe neither. […]