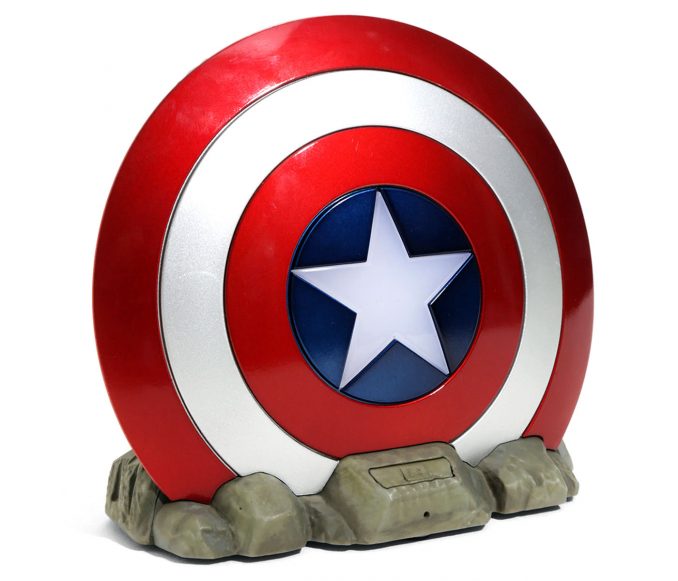 Although this Captain America Shield Bluetooth Speaker is really cool, it isn’t really original, since it is just an updated version of the one from Captain America: Civil War.

That doesn’t matter though, because it has everything you need in a portable speaker: Bluetooth connectivity, built-in rechargeable lithium-ion battery, USB charging (cable included), and amazing looks complete with a center star that lights up when it use. It can even be used as a speakerphone.

As far as we’re concerned, that’s America’s iHome. Modeled after Captain America’s shield, this Bluetooth speaker wirelessly connects to smartphones, tablets, and computers to stream audio on the go – and you can answer and end calls via speakerphone! Plus, the star lights up when in use.

Sold at BoxLunch, this Captain America Shield Bluetooth Speaker is $59.90. (At the time of publication, you can use the BoxLunch promo code BLGIFTS to save 20% off.)

If you’re looking for an audio speaker that is small enough to be portable, but offers large scale entertainment for all your daily needs, look no further than the Braven 6 Series Bluetooth Speakers. With three models to choose from (600, 625s & 650), you’ll […]

Space…The final frontier. These are the voyages of the starship Enterprise. Its continuing mission: to explore strange new worlds, to seek out new life and new civilizations, to boldly go where no Bluetooth speaker has gone before??? That sounds a little off, but the officially-licensed […]

Look amazing at a baseball game or simply walking down the street with this awesome Marvel The Avengers Captain America Rogers Shield Jersey. Its style is inspired by Captain America’s shield and features a navy blue background with embroidery that reads “The Avengers” across the […]

When it comes to rock ‘n’ roll music gear, it doesn’t get more iconic than Marshall guitar amplifiers. In fact, Jim Marshall created the company after guitarists, including Pete Townshend, visited his drum shop and complained that the available amps lacked the punch and volume […]

If you are into modern and minimalist designs, then you are going to love the Hidden Radio & BlueTooth Speaker. From designers John Van Den Nieuwenhuizen and Vitor Santa Maria, this Bluetooth enabled radio offers sound quality usually found in larger more bulky models. With […]

The iHome Star Wars Episode 8 Bluetooth Headphones will make listening to the Star Wars soundtracks a great experience. It features the black and red colors of Episode VIII, along with a great battery life and wireless range. Since it has no cords it will […]