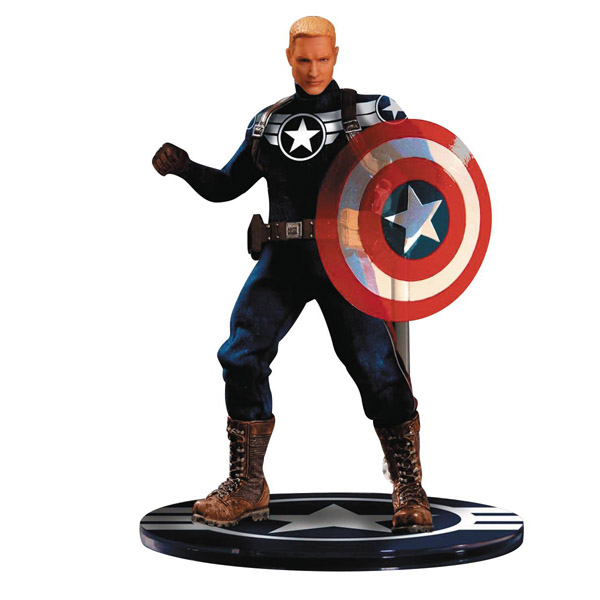 Steve Rogers has been the first Avenger since WWII but the Captain America: Commander Rogers Action Figure reveals the patriotic hero during a time when he let someone else sling the shield.

After Rogers was apparently killed, Bucky Barnes AKA Winter Soldier stepped up to become the new Captain America. When the original hero turned out to actually still be alive, he let Bucky continue fighting crime as Cap while Rogers took command of S.H.I.E.L.D., which of course required a new costume and shield because that’s how comic books work.

With over 32 points of articulation, the action figure is dressed in a dark navy and silver costume, with a semi-transparent shield. The new look doesn’t include a mask because secret identities don’t seem to be a big deal in the Marvel universe.

The Captain America: Commander Rogers Action Figure will be available November 2016 but it can be pre-ordered now for $79.99 at Entertainment Earth.

Your Captain America collection is not complete without this Captain America Commander Rogers One:12 Collective Action Figure. This is one good looking figure. It has been developed to capture Steve Rogers’ S.H.I.E.L.D. agent look and features over 32 points of articulation, intricate sculptural work, incredible […]

The Captain America and Bucky T-Shirt Hoodie lets you wear all the First Avenger and Winter Soldier feels you can possibly handle. Remember way back before the days of super-heroes when Bucky Barnes told Steve Rogers that he’d be with him ’til the end of […]

Comic book geeks will love this Captain America Steve Rogers No 10 T-Shirt, featuring the cover art for the latest adventure in the life of Steve Rogers, the ultimate traitor. With Sharon Carter by his side, Captain Hydra – I mean Captain America – stands […]

Show your love for the Marvel red, white, and blue with the Captain America Steve Epting Artwork T-Shirt, which features a sidekick-turned-assassin becoming the shield-slinging hero. If the name Steve Epting rings any bells, it’s no surprise because he’s put his artistic talent in a […]