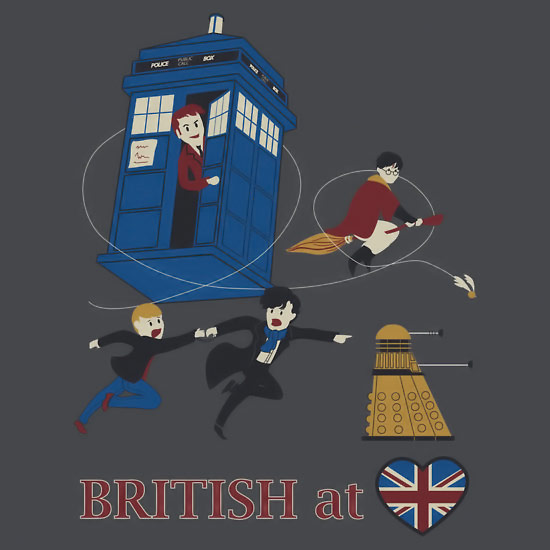 Sometimes I wish I lived in the UK because our friends on the other side of the pond have created some of the coolest geek characters. Luckily, I can show my Union Jack love with the British at Heart T-Shirt, which features some of the iconic characters that are recognized on both sides of the ocean.

Whether you’re into Sherlock Holmes and Watson, Harry Potter, or Doctor Who, this shirt has something for everyone, as the UK gang takes off in hot pursuit of a fleeing Dalek and the hard-to-catch Snitch, and if you happen to love all the characters, then your eyes are probably glazing over at the thought of such a crossover actually happening. 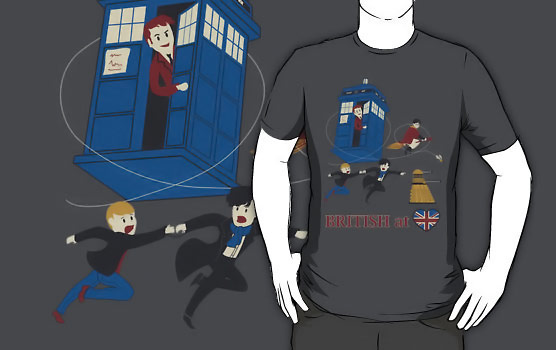 Unfortunately, it’s probably highly unlikely that this awesome cast of characters will ever share an adventure together so this shirt will have to be enough to quench your thirst for the British Dream Team, but we can always dream, right?

You can get the British at Heart T-Shirt for $24.54 at RedBubble.com.

These Harry Potter Golden Snitch Cufflinks will up your style and let the world know that you are a Quidditch champion. Wear the coveted golden snitch on your cuffs. They have a fixed back with HP initials and look amazing. They are a must for […]

Cases are a dime a dozen, but the Quirky Crossover iPhone 5 Case protects your iPhone with silicone straps, making it quite minimal, and a perfect alternative for people wishing for a thin case that looks distinctive and unique. The straps of the crossover case […]

So you had a hard day’s night from work today. If you need some help relaxing, just sit back, unwind, and think back to the time when you went on that trip down Abbey Road. Or you could just pour yourself a drink, play an […]

You know that expression when someone says a person has “a heart of gold.” Sometimes we geeks take things so literally that we start imagining anatomical hearts of gold that look like the one in this Heart of Gold Lapel Pin. Give this pin to […]

We’ve all heard about genetically modified crops, but there’s another way to mess with Mother Nature; by performing plastic surgery on baby cucumbers. Now you can grow cucumbers that slice into delightful heart shapes by using the Heart Shaped Cucumber Mold Set. First it was square melons, […]

You have seen them before, the floating photo frames. But never before in the shape of a heart. A question that comes to mind; why is it that we still haven’t seen any levitating digital photo frames?

One of my closest friends just went through a breakup and is still pretty heartbroken, even though it’s already been a few weeks. There’s little you can do or say to people in this state; you can only be there for them and hopefully they’ll […]