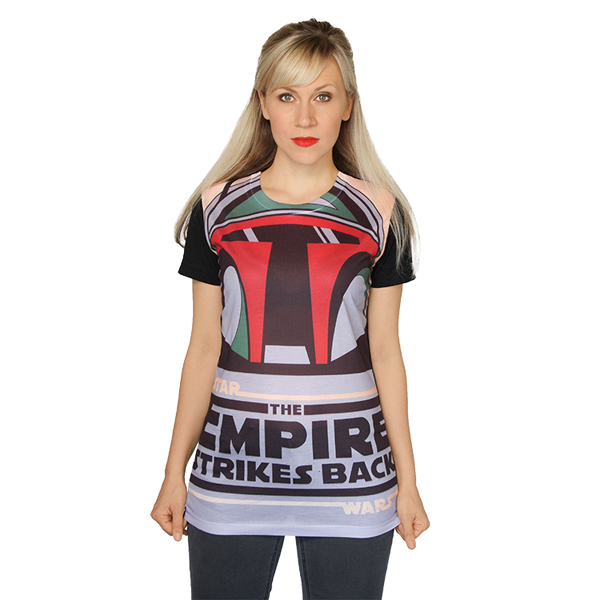 Show your love for the deadliest bounty hunter in the galaxy with the Boba Fett Sublimated T-Shirt.

The Empire Strikes Back introduced one of the most popular characters in the Star Wars universe, although there’s been no mention of Boba making a Star Wars VII appearance, which is kind of sad. However, you can keep the spirit of the Mandalorian alive with this stylish sublimated tee that features an edge-to-edge look at the iconic character, along with the title of the film that introduced him.

Okay, Fett’s actual first appearance was in the Star Wars Holiday Special, but we’re not really going to count that, are we?

The Boba Fett Sublimated T-Shirt is available for $25 at Her Universe.

How do you hold your bounty? Well, Boba Fett thinks highly of himself, which is why he prefers this Star Wars Boba Fett Faux Leather Coin Purse. It may not hold everything that Jabba paid him, but at least it keeps his change close at […]

You’ve seen the Star Wars Stormtrooper Head Cufflinks and while those make a nice trophy to wear on your sleeve, they can’t compare to the Star Wars 3-D Boba Fett Helmet Cufflinks. Did you ever think you’d be brave enough or lucky enough to wear […]

The Boba Fett Musical Snowglobe captures an iconic scene and recreates it with a holiday theme to make it more in tune with this Christmas season. Instead of wielding some sort of intimidating weapon, Boba Fett is instead holding a gigantic candy cane as a […]

Even Hello Kitty’s innocence is not immune to the dark side; especially when she gets to look like Boba Fett, the coolest bounty hunter Star Wars has ever produced. The Hello Kitty Boba Fett T-Shirt is perfect for the woman that loves to be cute and […]