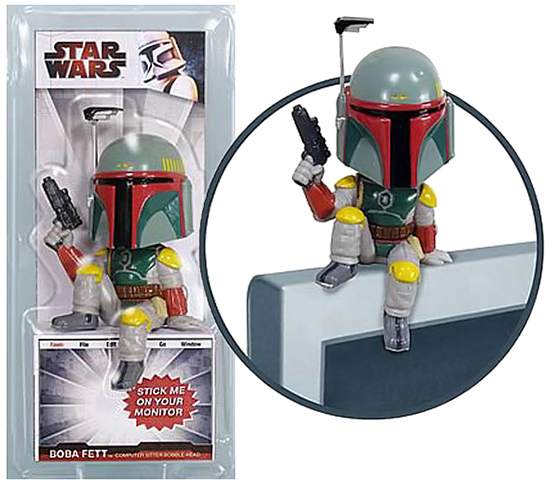 Is your computer protected from unauthorized access? If not, you need the Boba Fett Computer Sitter Bobble Head to sit guard on top of your monitor. Even though he’s a bad guy, Boba Fett, a bounty hunter that pursued Han Solo on behalf of Jabba the Hutt in The Empire Strikes Back, has long been one of the most popular characters from Star Wars. Even if you aren’t a big fan of bobble heads, you have to admit that this one is very cool.

If you have cats then you are probably used to a cat sitting nearby as you work on the computer. Now you can has a long cat perched atop your monitor while you work thanks to this Longcat Monitor Sitter. That is one long cat. […]

Batman normally keeps an eye on Gotham City, perched atop high buildings, with his cape fluttering in the wind. Now he will watch over your computer and desk space in the same way if you have this Batman Computer Sitter Bobble Head.