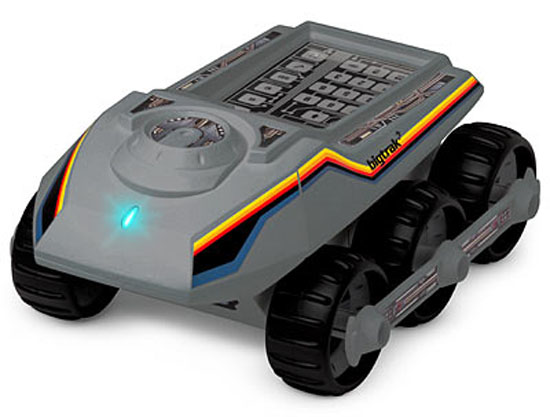 I felt like I fell through a time-warp when I saw this awesome blast from the past. The original BigTrak was an incredible toy that was ahead of its time. Now, the BigTrak Jr Programmable Rover takes all that 1979 goodness and makes it even better.

Just like its older big brother, the BigTrak Jr can be programmed with a sequence of commands that will control movement and the firing of the photon cannon, but the more modern and hip version also comes with a memory save function that keeps you from having to punch in the same commands over and over. An active accessory port is also included for the coming soon extra goodies. Need something for the BigTrak Jr to crawl over? No problem, because you also get some awesome moon-crater accessories that let you make your own obstacle course.

It doesn’t matter if you want to relive your own childhood adventures or introduce your kids to BigTrak joy, the BigTrak Jr Programmable Rover for $24.99 (reg. $39.99) from ThinkGeek is an awesome toy to add to your fun-time arsenal.

The ReCon 6.0 programmable rover is not only a fun and cool looking robot, it’s also meant to function as a learning tool for your kids, allowing them to program code and create missions for the robotic toy.

Say it loud. Say it proud. Say it with your belt buckle. All eyes will be on you when you walk through the door sharing your thoughts with the Programmable Scrolling LED Chrome Belt Buckle, and you’ll be able to get your point across without […]

If you’ve got something to say but just can’t seem to open your mouth and choke the words out, then you might need something like the LED Shirt with Time and Programmable Message Display to help you out.

The LED Programmable Message Fan ($7) is an electric handheld fan that allows you to display 1 of 6 different glowing floating messages of your choosing. Check out the LED Art Fan for a more advanced version.

Maybe you remember the homemade retro car USB memory sticks from a couple of months ago. Here’s a fun and cute alternative to those muscle cars; the VW Beetle and Camper Van USB memory sticks.

This programmable digital tire pressure gauge from Accutire features a large backlit LCD screen, a LED flashlight, and it remembers the recommended pressure for your front and rear tires.