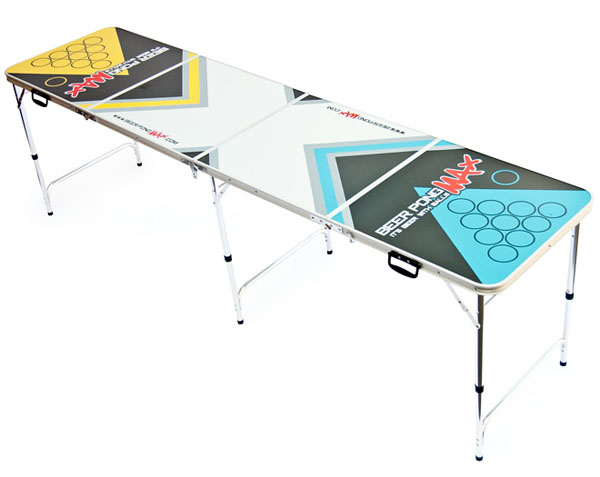 We’ve seen how drinking games can be made to be more adult or “civilized,” such as in the form of the Winerd Game. We’ve also seen how it can be semi-civilized, such as the drinking game that may be played with the Roulette Shot Glass Bar Drinking Game Set. And then there’s the drinking game that you probably used to play on a regular basis back in college; Beer Pong. Make the game gets easier when you have one of these BeerPongMax Tables.

The BeerPongMax Table might look pretty bulky, but if you’re still en route to the party or need to take it elsewhere, then just fold it up and take it with you. This is as “pro” as beer pong can ever get.

Crafted in sturdy aluminium with an 8ft x 2ft regulation size surface area, this pro-standard table folds down into a supremely portable briefcase with handles and a latch, so you can play your imbecilic glugging games wherever you fancy.

PA System in a Briefcase

Do you sometimes feel the urge to just whip out a microphone from your briefcase and hold a speech? You’re not alone. Apparently, this desire is so common that someone decided to manufacture a briefcase PA system.

The Mini Briefcase Business Card Case helps you recover from that embarrassing moment when you had finally hooked someone – you had almost landed your first long-term customer – when you dropped all of your business cards onto the floor and ruined your suave look. […]

Most briefcases are boring because they hold boring work-related items like paper and pens and spreadsheets, but the Mon Oncle Portable Briefcase Grill isn’t boring; of course, it isn’t really a briefcase either. Designed to look like a vintage briefcase or suitcase, the Mon Oncle […]