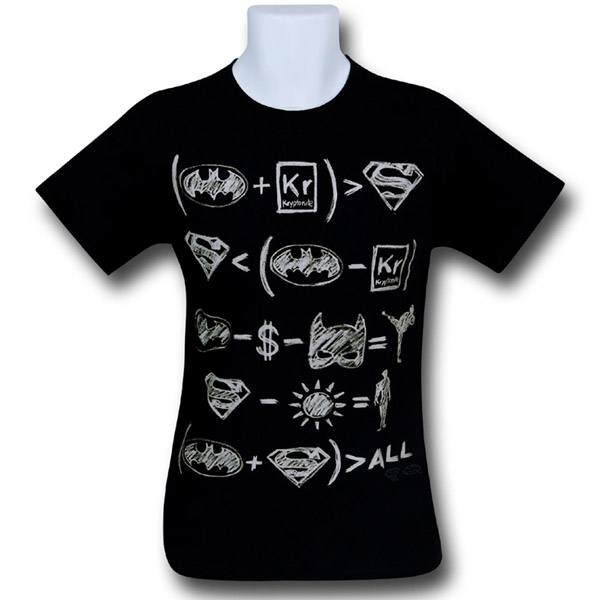 Everyone knows Batman is better than Superman in every way but the Batman Superman Hero Equations T-Shirt tackles the issue with math, because math is about as indisputable as one can get.

The black 100% cotton tee gets down with the mathematics, using a number of equations to prove the Dark Knight is better than the Man of Steel.

Of course, Batman is a strategic genius so he wouldn’t go against the Kryptonian without Kryptonite, resulting in Batman being better.

However, as the second line demonstrates, even without the radioactive rock, Batman is still better… because BATMAN!

Even with Bruce Wayne stripped of his mask and money, he’s still a skilled fighter, while Superman is just a mild-mannered reporter when you take away his sun-fueled powers.

Fortunately, math also proves what all comic books fans have always known, and that is together, Batman and Superman are greater than everyone else. Heck, they’re not called the World’s Finest for nothing.

Use the power of math to lend weight to your comic book arguments with the Batman Superman Hero Equations T-Shirt for $16.99 to $20.99 at SuperHeroStuff.com.

This geeky clock has a series of math problems replacing the normal numbers on the clock face. If that sounds like fun to you, this Pop Quiz Math Equations Wall Clock needs to be on your wish list.  Adding to the coolness (or geekiness?), the […]

I’m no math genius, but if I was, I would show off by wearing this Math Equations Silk Tie. I can’t understand any of it, but I know it would make a great gift for my geeky math loving friends. This tie is 100% silk […]

The wristwatch that was made with math geeks, math wizards, and math whizzes in mind is now here: the Equation Watch. The entire watch is criss-crossed with grids so it’ll look like you’ve got some sort of graphing paper on your wrist. But the best […]

Most people start their mornings off with a hot cup of coffee; so in honor of 3.14, GeekAlerts thought this Math Mug would be worthy of all those math guys and gals out there looking for a little more from their mugs. This 14 oz […]

Remember a true man of steel with the Superman ‘You’ll Always Be My Hero’ T-Shirt, featuring a great portrait of everyone’s favorite Superman, Christopher Reeve. Many people have portrayed the last son of Krypton over the years, but Christopher Reeve will probably be the one […]