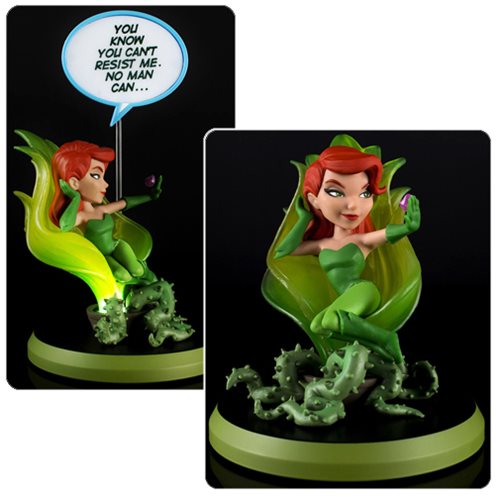 Got an itch? The Batman Poison Ivy DC Comics Q-Pop FX Vinyl Figure will help you scratch it.

Dressed in her iconic green leotard, Pamela Isley, known to most of Gotham City as Poison Ivy, sits within the confines of one of her giant plants, enjoying the flower on her finger. Like other Q-Pop figures, this one comes with a little whiteboard speech bubble and marker that lets you write comments for the character as if she’s talking.

However, unlike Q-Pop figures that have come before, this one includes a light-up feature at the base that makes Ivy’s translucent plant throne appear to glow.

The Batman Poison Ivy DC Comics Q-Pop FX Vinyl Figure will be available later this month but it can be pre-ordered now for $19.99 at Entertainment Earth.

The Dark Knight finds himself in an interesting position on the DC Comics Batman Poison Ivy Catwoman T-Shirt. I wonder if Catwoman will help him scratch the itch that Poison Ivy will give him. The Hush storyline is considered one of the best Batman stories […]