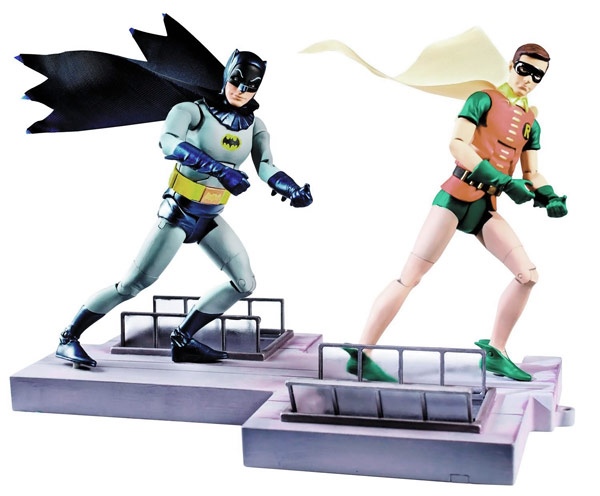 It’s time to take a trip back in time and capture the Caped Crusader and the Boy Wonder in an iconic scene from the Batman TV show with the Batman Classics 1966 TV Moments Action Figure 2-Pack.

Adam West and Burt Ward have been transformed into 6-inch-tall action figures in this scene that any Bat-fan of the old television series would recognize because it seemed like the Dynamic Duo was scaling a building and chatting with familiar (for the time) faces during every episode. Apparently, guest-starring as one of the people in the windows was a big thing back in the 60’s.

As if having this classic scene in your Batman collection wasn’t enough, this 2-Pack is the only way to get your hands on this exclusive Robin action figure so you probably don’t want to wait too long before snatching this up. Quick! Get to the Bat-phone, or just use the Bat-Internet.

The Batman Classics 1966 TV Moments Action Figure 2-Pack will be available July 2013 but you can pre-order now for $32.99 at Entertainment Earth.

While geeks would consider That’s Not Your Mommy Anymore – A Zombie Tale a fitting book for kids (just for some, anyway) and A Girl’s Guide to Dating a Geek Book something that all women should read, they probably won’t make the cut to be […]

This Batman Classics Collection Robin Maquette Statue honors the Boy Wonder as he was seen in the 1950s. The work of Dick Sprang comes to life in full 3D, right on your desk or shelf. He looks just like he did in the comic books. […]