The Dark Knight and the Feline Femme Fatale of Gotham City are ready to get serious in the comfort of your own home, thanks to the Batman Catwoman Arkham City Duo Wall Graphic.

The highly-detailed graphic measures 6’6″ high and 3’9″ wide, and like all Fathead decals, it’s easy to move the image from one location to another, without having to worry about causing any damage to walls.

In addition to getting the Cat and the Bat, you also receive a few Batman: Arkham City wall graphics… along with a Fatboy decal, because promotion makes the world go around. And why not? Everyone deserves the chance to Fathead their walls. 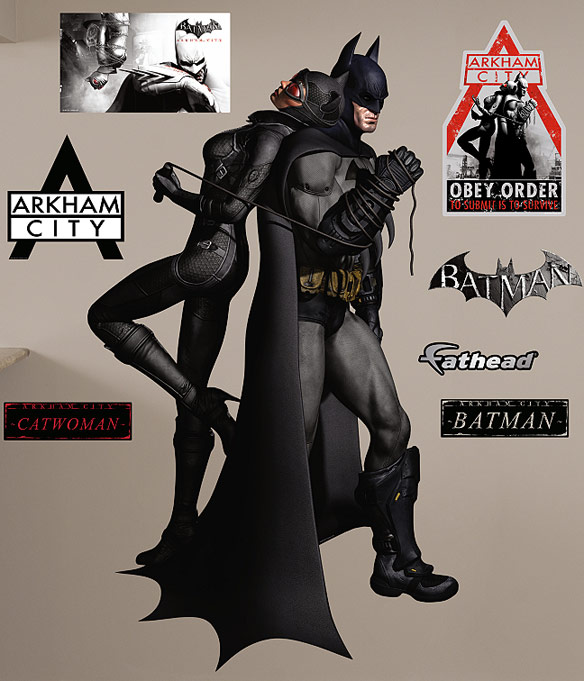 The Batman Catwoman Arkham City Duo Wall Graphic is available for $99.99 at Fathead.

If you want a Jedi Master to protect you after you turn the lights off at night, the Glow in the Dark Yoda Fathead Wall Graphic is the bodyguard you’re looking for…looks like the pointy-eared little guy is actually able to use the Force to […]

Maybe the Dark Knight can’t leap buildings in a single bound but the Arkham Knight Batman Leap Wall Graphic shows that Gotham’s protector has no problem with gliding through the night, instilling fear in those who see him coming. With detailing that makes it almost […]

The Dynamic Duo, and a certain vigilante wearing purple, face iconic villains with the Batman Classic Comic Book Collection Wall Graphic. A 6’7″ X 4’4″ sheet holds more bat-goodness than you can shake a batarang at. In addition to Batman, Robin, and Batgirl, the collection […]

Get ready to bring the crew of the USS Enterprise into your home with the Star Trek: The Original Series Collection Fathead Wall Graphics and feel like you’re a part of the classic five-year mission to search out new life in distant galaxies. In addition […]

Current Fathead Coupons Decorate your office, dorm, or bedroom with giant wall stickers. However, don’t pay full price when there are Fathead Promo Codes to help you save. With Fathead coupons, promotions, clearance specials, and discount offers you can save on giant wall stickers for […]