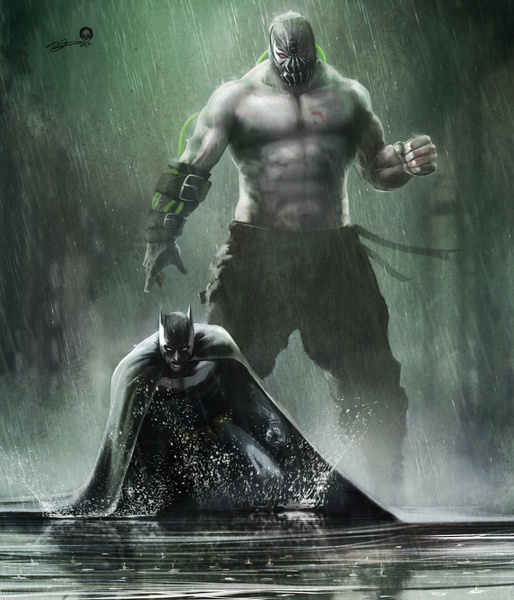 The Batman Bane V The Bat Art Print gets it right while all the movies got it wrong.

Bane made his first big screen appearance in “Batman & Robin,” with a version of him that was so awful the character might as well have had a different name. The Dark Knight Rises did a better job of it, although he didn’t wear the cool mask and he once again turned out to be nothing more than a puppet following the orders of his master.

In the comic books, Bane was the intellectual equal to Bruce Wayne and he didn’t have a problem holding his own when fighting the Bat. Artist Andy Fairhurst brings that version of Bane to life in this art print that’s just as dark as anything Christopher Nolan could dream up, and it looks like the Venom-powered villain is about to catch Batman off-guard. The print is available in a variety of sizes, ranging from 8″ x 9″ to 22″ x 25″.

In the history of the caped crusader, only one man has truly broken the Bat, and that muscular menace is featured on the Face of Bane T-Shirt in all his awesome glory. Don’t get me wrong. I’m looking forward to seeing Bane go toe-to-toe with […]

Let the Bat Signal summon the Dark Knight to your house with the Batman Bat-Sky Art Print, created by comic book artist Neal Adams. Hold on to your utility belts, Bat-fans, because it will take a lot of Bat-love to get this bit of artistic […]

Get ready to add a shot of Venom to your Batman collectibles with the Bane Mercenary Version Statue. Standing 34.5-inches tall, Bane is one of eight assassins contracted by Black Mask to kill Batman in the Arkham Origins video game. While similar to his comic […]