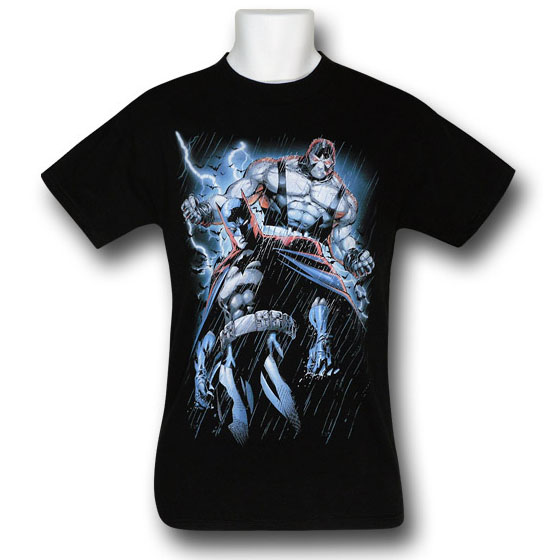 If wearing a shirt with one macho character on it makes you feel tough, then two macho characters in one spot should make you feel like you’re the king of the world. The Batman-Bane Rising T-Shirt features two of the toughest guys that have ever existed in comic book history.

If you’re looking for Bane on his own, then the Face of Bane T-Shirt might be what you’re looking for, but no villain is complete without the hero getting in the way with his goodie-goodie morals. Hmmm… Batman? Goodie-goodie? Well, the Dark Knight will probably never be mistaken for an angel but he’s still one of the good guys, although that scowl on his face might have you wondering about that.

As Batman looks out with his intimidating gaze, Bane approaches from behind. You just know that this isn’t going to go well for either one of them. I foresee lots of bruises and broken bones in their future.

Celebrate the upcoming film, “The Dark Knight Rises,” and all things related to the caped crusader with the Batman-Bane Rising T-Shirt for $19.99 to $25.99 from SuperHeroStuff.com.

In the history of the caped crusader, only one man has truly broken the Bat, and that muscular menace is featured on the Face of Bane T-Shirt in all his awesome glory. Don’t get me wrong. I’m looking forward to seeing Bane go toe-to-toe with […]

Stomp around like the king of the monsters when you’re wearing the Godzilla Rising Tide Shoes. You probably won’t destroy any cities or create tidal waves if you splash a puddle but you’ll look pretty good with Godzilla decorating your feet. Available in a wide […]