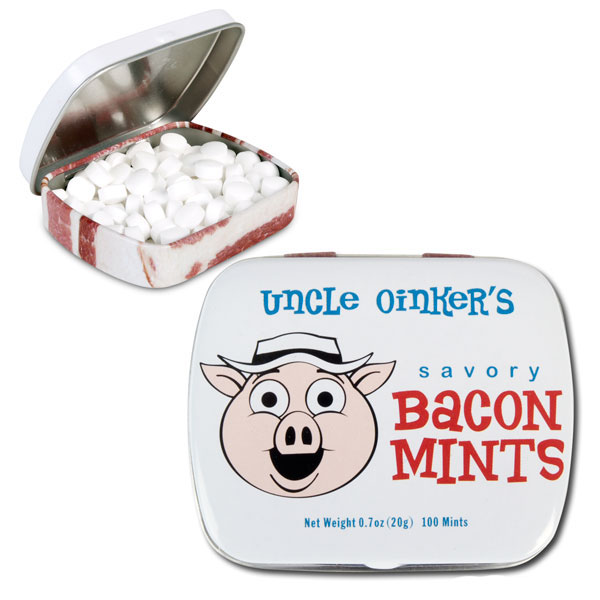 Some people pop mints to get fresher breath. The Simpsons Duff Beer Can Mints might look like they might have something other than mints in them, but I tell you it’s all peppermint in those tins. Others pop some candy when they want things to sour up, and fast. For these people, the Sonic the Hedgehog Chaos Emerald Candy is a true gem. However, if you just want something minty fresh and tangy yet succulent and meaty at the same time, then you my friend should look no further than Uncle Oinker’s Bacon Mints.

If you’re already swathed in Bacon Perfume and brushed your pearly whites with the Bacon Toothpaste, why not cap things off with Bacon Mints? It’s a wonderful life for bacon lovers with all these bacon treats being released nowadays. You can even get your kids addicted to it at a young age by brainwashing them with the My First Bacon Talking Plush.

Each one of these mints tastes like a delicious slice of crispy bacon with just a hint of mint flavor to give it that extra punch!
It may sound weird but once you taste it, you’ll see that mint and bacon is a match made in China. Each 2″ x 2″ tin contains one hundred mints.

Get some funky smelling breath with these Bacon Flavored Mints from Amazon.com for $2.

I’m not sure how these Star Wars Mints are going to taste, but I bet Princess Leia wished Han Solo had them before he snuck in his first kiss. Han, always going bold and strong; that’s why we love him. These mints come in an […]

I’ve been trying to eat healthier these days. I’ve been having salads for lunch for a whole week now, and to be honest, sometimes I still find myself hungry after even two servings. If your salads are starting to taste duller than ever, then the […]