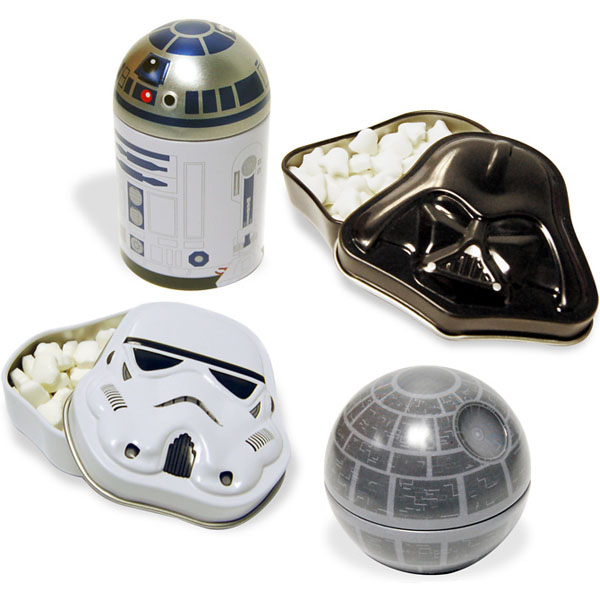 I’m not sure how these Star Wars Mints are going to taste, but I bet Princess Leia wished Han Solo had them before he snuck in his first kiss. Han, always going bold and strong; that’s why we love him. These mints come in an several different officially-licensed Star Wars collectible tins (Darth Vader, Stormtrooper, Death Star, and R2-D2) and have mints shaped to match the tin. Who knew chomping on Darth Vader’s head would give you such fresh minty breath.

If your mouth tastes like a bulls-eyed womp rat and your nearest toothbrush is in a bathroom cabinet far, far away; then you need Star Wars Mints! These delicious candies come in nifty little tins featuring iconic characters from the Star Wars Universe (as well as a planet-obliterating space station). Choose from a Darth Vader and Storm Trooper combo, or R2-D2 and the Death Star. Each one has its own specially-shaped mints inside.

You can pre-order the Star Wars Mints at Firebox for £6.99.  In the meantime, checkout these other cool mints: Bacon Flavored Mints, Bawls Mints, Narwhal Horn Mints, and NES Controller Mints.

When it comes to mints, choose this Star Wars Mints 2-Pack. They must be amazing, because a lot of Star Wars aliens look like they would have really bad breath. Plus they come in Two different and awesome versions: R2-D2 has droid-shaped mints and the […]

Some people pop mints to get fresher breath. The Simpsons Duff Beer Can Mints might look like they might have something other than mints in them, but I tell you it’s all peppermint in those tins. Others pop some candy when they want things to […]

GeekAlerts has shown you plenty of energy drinks and energy foods in the past, but the Foosh Energy Mints take it to a whole new level. With 100 milligrams of caffeine per mint, these little candies pack as much caffeine as a cup of coffee […]