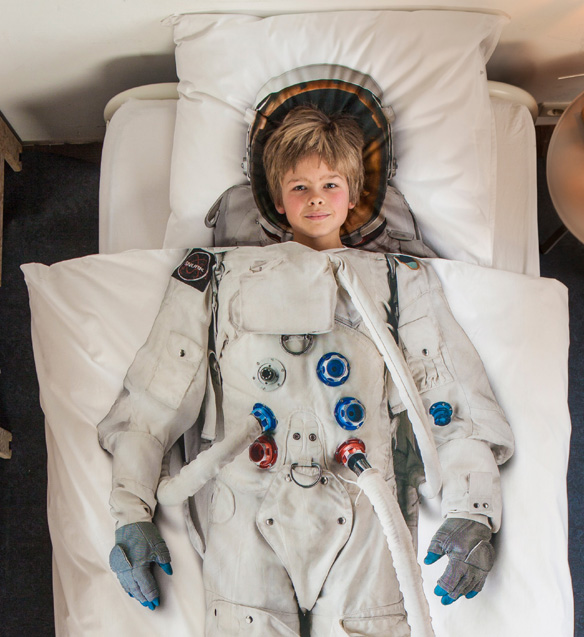 Ever wish you had tried for an adventurous job with NASA instead of becoming a cubicle rat? You can still find out what you’d look like in a spacesuit with the Astronaut Sheets, and it’s also a fun way to say you were in bed with an astronaut.

This duvet and pillowcase combo features a hi-res image of an actual spacesuit from the Space Expo Museum in Holland so you don’t have to worry about any cheesy-looking Halloween costume. This is as real as it gets without actually breaking into the Space Center and stealing a suit of your own. 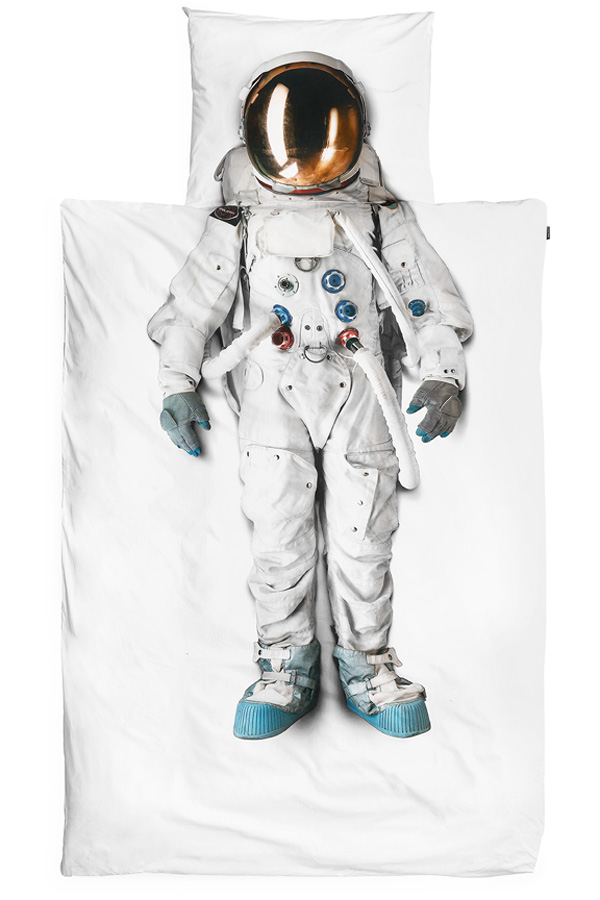 When the bed is made, it looks like a space explorer has decided to catch a few zzz’s at your place but the real magic happens when you’re actually in bed because your head on the pillow and the cover pulled up makes it appear that you’re actually wearing the outer space outfit.

It might not be as cool as wearing the real thing… but then it probably wouldn’t be as comfortable to sleep on an actual spacesuit.

After a good night sleep in the Space Shuttle Bed and a steady Astronaut Ice Cream breakfast, you can now get dressed for success with this Apollo 11 spacesuit replica.

Some of you are pancake people who wouldn’t think twice about ordering a pile of flapjacks for Sunday brunch and passing out onto a stack of Pancake Floor Pillows, or hiding in a Pancake Quilt dripping in buttery syrup (don’t forget the side of bacon rug.) […]

While the coolest rubber ducks are probably the Star Wars, Doctor Who, and Zombies, these Astronaut and Space Alien Rubber Duckies are still pretty sweet. They are very inexpensive, so for just a small amount of money you can get 12 of these astronaut rubber […]

Blast off to outer space with your morning coffee thanks to this Astronaut Helmet 3D Mug. This ceramic mug is shaped like an astronaut’s helmet. It holds 20 ounces of your favorite beverage, even Tang if you want. Space fans will love drinking their coffee […]

If only beds came equipped with dual climate control systems like some luxury cars… If you or someone you know loses sleep because they get too hot and sweaty, maybe this Bed Fan is the best remedy. Bed Fan The Bed Fan delivers a cool breeze between the sheets—without AC costs, […]

The Real Astronaut International Space Station 1:4 Scale Statue is a realistic 1:4 scale NASA astronaut statue with light-up helmet. Space enthusiasts are going to appreciate this one. It features a beautifully detailed EMU spacesuit and equipment and comes with an SSRMS robotic arm and […]

Ready for a hoodie that’s out of this world? The Space Odyssey Astronaut Hoodie will make you look like a U.S. astronaut so that you can go on a space odyssey every day. It features embroidered details like sleeve “bellows” and even a “shuttle mission” […]

Frequent travelers know how much of a hassle it is to pack and unpack the same stuff every time they go on a trip. For example, toiletries. They’re basic stuff that you have to bring in every trip you take–and sometimes, even the travel-sized versions […]