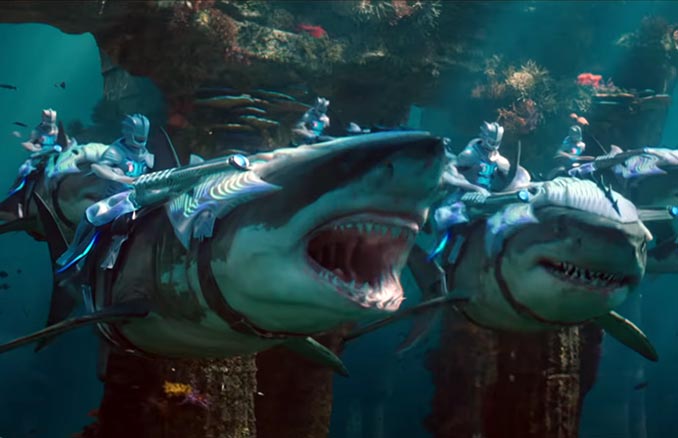 If you thought Shazam felt more like a Marvel production than DC, you’ll probably feel the same after watching the Aquaman Official Trailer. It combines breathtaking visuals, energetic action sequences, massive scope, and humorous interludes. Although $160 million (the reported budget for Aquaman) isn’t small at all, the extensive CGI effects make it look like it would be even more expensive.

Aquaman is set to hit theaters in the US on December 21, 2018. Watch the Aquaman Official Trailer from Warner Bros. Pictures:

Wan directs from a screenplay by David Leslie Johnson-McGoldrick (“The Conjuring 2”) and Will Beall (“Gangster Squad,” TV’s “Training Day”), story by Geoff Johns & James Wan and Will Beall, based on characters from DC, Aquaman created by Paul Norris and Mort Weisinger. The film is produced by Peter Safran and Rob Cowan, with Deborah Snyder, Zack Snyder, Jon Berg, Geoff Johns and Walter Hamada serving as executive producers.

Straight from Atlantis to your collection, this Aquaman DC Comics Bombshells Mera Statue looks stunning. This stunningly stylized statue of Aquaman’s super-powered love interest will be the leading lady in your collection. This statue is based on the popular pinup style of the 1940s and […]

Can you feel the love with the DC Comics Designer Series Aquaman and Mera by Pat Gleason Statue? Designed by Patrick Gleason, an artist for DC Comics who has worked on a variety of titles that include Aquaman, this 16 1/3-inch-tall statue features Aquaman and […]

The future king of Atlantis is ready to come home with you as the Justice League Aquaman One:12 Collective Action Figure. Based on Jason Momoa’s portrayal of the character in Justice League, this highly-detailed figure, with over 30 points of articulation, features Arthur Curry AKA […]