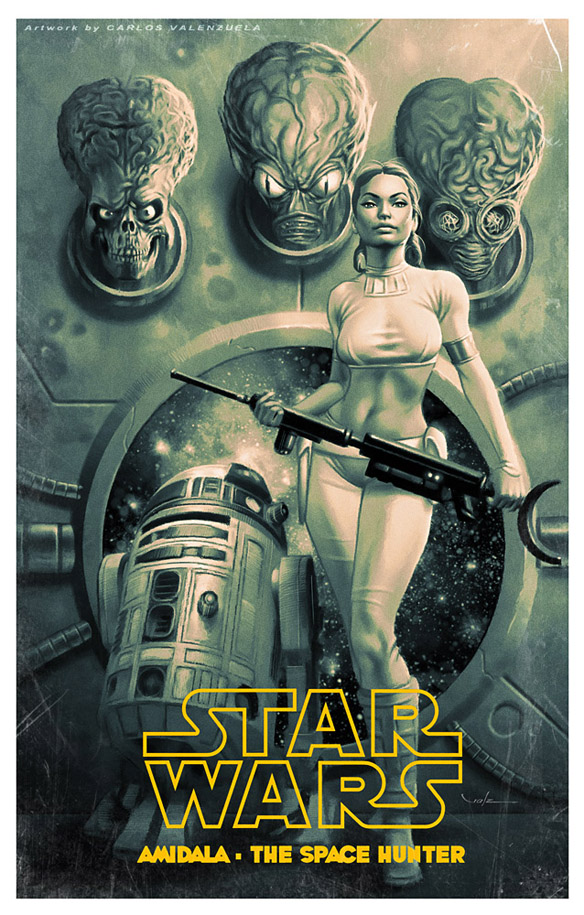 Ever wonder what really happened to poor Amidala after Anakin went and got his legs chopped off by Obi-Wan? The Amidala Space Hunter Art Print provides an answer.

Star Wars fans know half the story. We know Anakin got his butt handed to him by Kenobi during an epic lightsaber battle, and we know Anakin went on to become Darth Vader, who terrorized the galaxy for years.

We heard Amidala died giving birth to Luke and Leia… but honestly, would you want to risk being associated with the Dark Lord of the Sith? Would you want to risk Vader coming for you and making you his unwilling bride? Of course not, so Amidala faked her death and became a bounty hunter, tracking dangerous aliens from one end of the galaxy to the other. Ah, that sneaky R2-D2; he’s a master at keeping secrets.

Artist Carlos Valenzuela wasn’t shooting for a resemblance to Natalie Portman, which is why Amidala looks a little different from the movies. However, sci-fi fans will undoubtedly recognize her trophies:

The aliens, from left to right:

The Amidala Space Hunter Art Print is available for $22.77 at Under the Floorboards.

Inspiration leads to a new look for Star Wars’ Padme with the Snowbunny Padme Amidala Statue, featuring the former queen suiting up for some chilly weather. You’ve missed half the story if you’ve only watched the Star Wars movies because the characters have all-new adventures […]

You can get two action figures in one with the Star Wars Anakin Skywalker to Darth Vader Action Figure and recreate Anakin’s fall from Jedi to Sith Lord. With this figure, you become the master of Anakin’s fate. Will he be able to redeem himself […]

Chances are pretty good that your childhood did not include reading stories about little Predators, and that’s sad. Fortunately, the Hungry Little Hunter Digital Print lets you at least enjoy the artwork of what such a book might have looked like. Inspired by the movie, […]

Bring home the moment Anakin took his first steps towards the Dark Side with the Revenge of the Jedi Anakin Skywalker VS Tusken Raiders Polystone Diorama. Born into slavery on Tatooine, little Anakin seemed almost destined to become a Sith lord but life started going […]

Rocket Raccoon, along with Groot, gets a mash-up with Leon: The Professional on the Rocket the Professional Art Print, and I have to admit I’d pay to see this movie. Long before she became the queen of Naboo (and met that Anakin brat), Natalie Portman […]