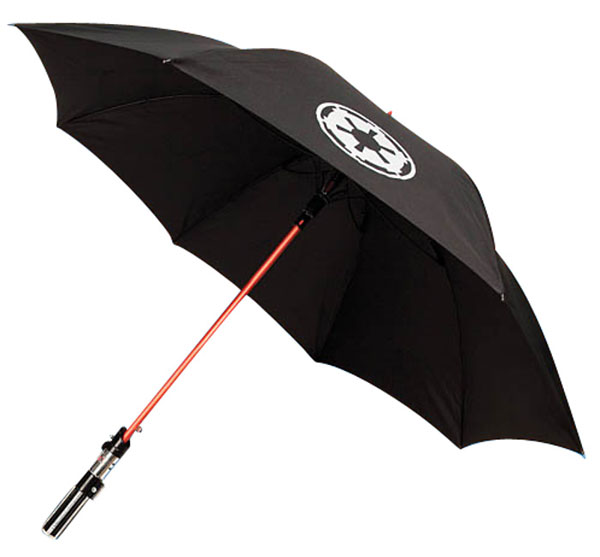 I don’t know how much rain Darth Vader really has to worry about. He’s either on the Death Star, flying his TIE Fighter (TIE Advanced x1), or simply cruising around on a Super Star Destroyer. Luke on the other hand, he’s running around in the swamps of Dagobah training with Yoda; he could probably use the Star Wars Lightsaber Umbrellas.

These officially licensed Lightsaber Umbrellas are designed to look like exact replicas of the lightsabers used by Darth Vader, Anakin, or Obi-Wan Kenobi. Each features 1.2 meter, 100% black nylon canopy and the Anakin and Obi-Wan Umbrellas are emblazoned with the emblem for the Jedi Knights, while the Darth Vader Umbrella has an emblem of the Galactic Empire.

All three Star Wars Umbrellas are available for pre-order from Firebox for £39.99. Choose between the Darth Vader Umbrella, Obi-Wan Umbrella, and Anakin Umbrella; or you could just get all three.

Do you have any friends in the UK? If so, now’s the time to shower them with compliments, and then let them know you want one of these Doctor Who TARDIS Umbrellas. Allow the Doctor to keep you and your Companion dry with these officially-licensed […]