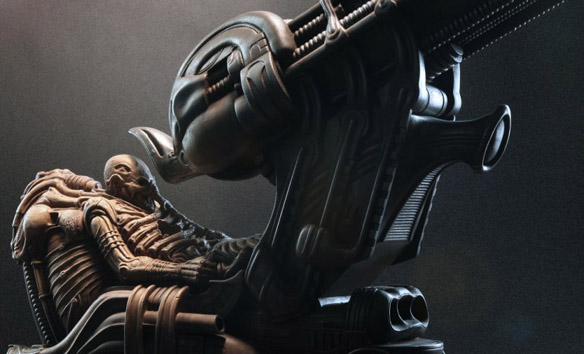 Bring a little H. R. Giger into your home with the Alien Space Jockey Maquette, featuring the big guy who captivated sci-fi and horror geeks for decades, despite being dead when he’s seen for the first time.

Long before the Engineers were introduced in Prometheus, Ellen Ripley and the crew of the Nostromo discovered a big, not-pretty guy sitting in the mother of all chairs. He had no name and no history but the crew on the set of Alien dubbed him Space Jockey and the title stuck.

The doomed pilot, who may or may not have been preparing to bomb Earth with Xenomorph eggs, is now available as a highly-detailed, 21″ H x 18″ W x 23″ L statue.

The Alien Space Jockey Maquette will be available Dec 2015 – Feb 2016 but it can be pre-ordered now for $599.99 at Sideshow Collectibles.

Are you a super-fan of the movie, Alien? Do you live in the UK? Do you have room in your home for the massive Alien Space Jockey Model? If you don’t have the room, are you willing to live in your yard to make room […]

This Alien Fossilized Space Jockey Foam Replica is based on the 1979 horror classic, Alien. It is a highly detailed replica that is perfectly in scale with NECA’s 7-inch figure line, so now you can recreate all of your favorite scenes from the classic movie […]

When it comes to toys for kids, I’m all for those that help develop some sort of skill, rather than have them play with something that’s just all about shooting aliens or killing zombies. The Hide and Squeak Eggs is one such toy.  Hide and […]