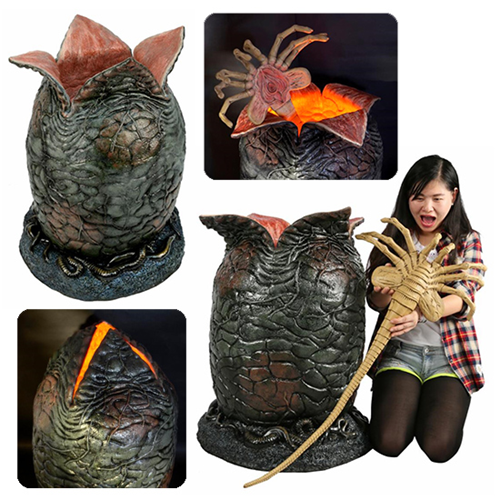 The Xenomorphs have arrived with the Alien Light-Up Egg and Facehugger Life-Size Foam and Latex Prop Replica, guaranteeing that you can get a hug any time you want one.

Know what’s worse than a tall insect-like alien that spits acid? The funky, creepy facehugger that force-feeds you the egg that turns into the insect-like alien… after it tears through your chest. Now you can have that freaky little creature in your home. Supposedly, you don’t have to worry about it actually forcing an alien egg down your throat. Supposedly.

Standing 3-feet tall, this foam replica egg even has articulated flaps with a wire armature that let you open or close the flaps on the egg, and the latex facehugger has a bendable tail so it can be posed in a variety of ways. Of course, you don’t want to forget the LED lights inside the base that provide that perfect ‘we’re all doomed’ lighting effect.

The Alien Light-Up Egg and Facehugger Life-Size Foam and Latex Prop Replica will be available April 2016 but it can be pre-ordered now for $428.99 at Entertainment Earth.

Park this Alien Ovomorph Egg Cookie Jar in your kitchen and watch everyone be way too scared to steal your cookies. No one wants to get attacked by an alien. This cookie jar has a cool Facehugger lid that will keep others away. Alien Ovomorph […]