The Japanese toy manufacturer Tomy today announced the debut of an innovative “sensor” technology for its forthcoming AI Tech Racing brand, featuring the ability to detect and avoid obstacles, and negotiate turns and corners without input from the user.

Unlike traditional “slot” cars and similar vehicles that are guided by grooves or “slots” in the track on which they run, AI Tech Racing can be enjoyed on or off the track. Available sets include individual cars, accessories, race set featuring a custom track piece and a deluxe version. The included remote control allows users to control the speed of the vehicles including turbo speed to pass their opponent while obstacles and barriers increase the fun and difficulty. 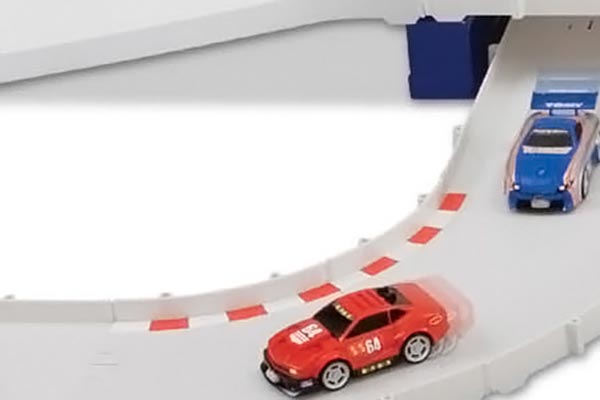 You will be able select from an assortment of six individual cars each with unique designs and graphics with an SRP of $12.99. The cars and remotes each require two AA batteries and all vehicles come with decals for customizing.

For those racers that want it all – track, accessories and two cars – the AI Tech Racing Race Set features everything needed to build an exciting course for a suggested retail price of $39.99. For $10 more, the Deluxe Race Set takes AI Tech to the next level with 18 pieces of track and six obstacles. Finally, the Ultimate Deluxe Race Set is the quintessential racing kit with 29 track pieces, electronic lap counter, two exclusive cars and much more – all for $99.

The AI Tech Racing by Tomy is set to hit retail shelves in fall of 2008. (Update: Link removed because the website is gone.)

There’s nothing better than fresh-squeezed juice straight from the fruit. Sure, there are all sorts of fancy electric juicers that yield amazing, non-concentrated juice. But the Takara Tomy Gurefuru Chuchu Fruit Juicer Toy doesn’t require any batteries, and it’s designed to let kids in on […]

The Japanese toy manufacturer Tomy has announced its QFO – a small radio-controlled flying toy that was recently displayed at the 2008 Tokyo Toy Show in Japan. There isn’t much info available about this new little gizmo, but Andrew Liszewski over at the great OhGizmo […]

Nothing’s gonna hold back these determined speedster grannies on walkers. Hold onto your dentures ’cause the Wind-Up Racing Grannies are set to duke it out to the finish line, whether it’s the very last thing they do…

This Racing Flame Teapot might look a tad familiar to you if you’re also familiar with the Hot Wheels logo. That’s because the latter features some “racing flames” on the text that just brings to mind images of cars racing by so fast, that the […]

Since women like men who ride motorcycles, a repeated gag on movies and TV is for a guy to carry a motorcycle helmet with him to a bar or nightclub, even though he doesn’t ride a motorcycle. I’m not sure if this trick works in […]