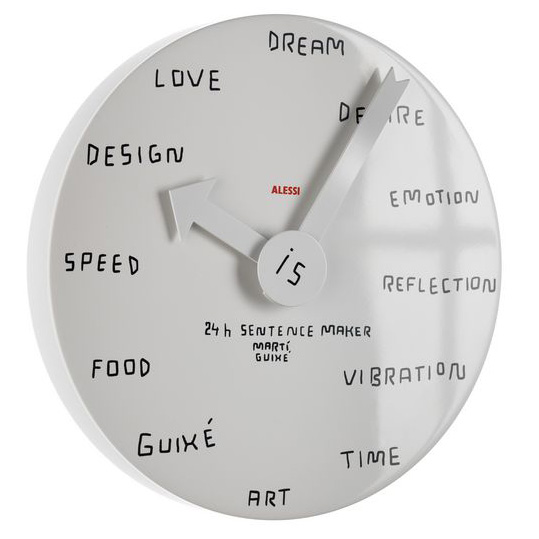 Twenty-four hours in a day might seem too short for those who are eternally busy, and too long for those who are eternally bored. If you belong in the latter group and find yourself constantly staring at the clock because you’ve got nothing else to do, then here’s something that will give you some food for thought: the 24 Hour Clock Sentence Maker.

Instead of the usual numbers, you’ll see words instead on the 24 Hour Clock Sentence Maker. There’s a huge circle with the word “is” in the middle to connect the various words that you see on the clock. Plus, you know, it’s a different and fun way to tell the time. For example, 9:20 becomes “Speed is Vibration?” and 6:10 becomes “Art is Emotion?” What do you think?

White clock with words for hours and the word is at its center creates phrases as the hands mover around the clock. This series of products designed by Marti Guixe for Alessi is based on his concept that objects have become tools for perceiving reality of every day and for communicating not only with objects, but also with other people through the objects.

The 24 Hour Clock Sentence Maker is available from Fitzsu for $163.

Want to share your favorite movies but don’t know how to explain it without writing a 10-page report? Let the Single Sentence Film Summary T-Shirts do the work for you. With simple designs consisting of a single sentence, the release date, and the movie’s rating, […]

Some really spectacular lagers, a.k.a. Sapporo and Asahi, have come from the wondrous country of Japan. To hit international beer status, beer must meet all the proper criteria, including delivering just the right amount of foaminess. Japanese lagers produce truly glorious foam when poured from draft. What’s their secret? They could tell […]

For frequent fliers and people that suffer from everyday stress, why not try the Homedics NMS-350 MAS Neck and Shoulder Massager Shiatsu with Heat.  This massager offers three different massage options (Shiatsu, vibration, or Shiatsu & vibration combined) with the option of using heat.  Why […]

The Bandai Cook Joy Pack Sand Maker is a really cool machine for making unique cookies and sandwiches. Instead of making a plain sandwich, you can make really cute fun sandwiches that kids of all ages will like. There are a range of shapes, including […]

When I was a kid we used to use our crayons until there was just a little stub left, but these days it seems that they are rarely used beyond the tip. (Wow…saying that sentence makes me feel really old. Hey, get off my lawn!!!) […]

A lot of young parents that I know prefer to prepare their own baby food and ice cream. This way they know exactly what’s going into the treats that their offspring will eventually consume later on. If you and your partner are huge health buffs […]