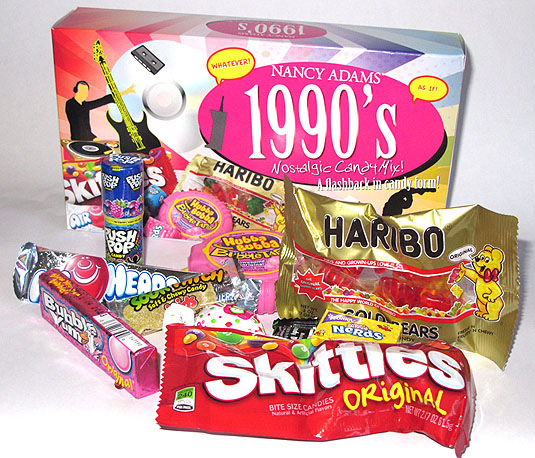 The 1990s Nostalgic Candy Mix is the greatest way to relive the last decade of the century. Nirvana? Not edible. Skittles? Edible. Therefore, Skittles are a more fun way to relive the decade.  You get tons of great candy to look at and then eat, so make sure you’re ready for an intense session of eating! Me? I’m always ready for food. That’s basically my job, except I don’t get paid to do it. *Facepalm*

Anyone remember the 1990s? To us, it’s sort of one, big blur. We remember President Clinton, Seinfeld, and, well, that’s about it. Oh, a little thing called “The Internet” got started in the 90s, so we suppose the decade wasn’t a total loss.

This awesome gift box is great for anyone who was born in the 90s, and is just $11.  Inside, you get Skittles, Haribo Gummy Bears, Hubba Bubba Bubble Tape, Air Heads, Toxic Waste, Warheads, and more!  You can pick one up from Baron Bob if you’re interested.

If you’d rather look at some more great candy, then check out the Grillz Candy and the Crackheads Candy when you’re ready to move on.

Everybody needs tape. Because a plain old roll of tape is so easy to misplace, there are times when you must have an attractive, quirky dispenser like this Poulain Wooden Camera Tape Dispenser. Poulain Camera Tape Dispenser A vintage-inspired wooden replica for the adhesive needs of camera buffs and […]

Are your dirty clothes so raunchy that they could be mistaken for biohazard? Maybe they need to be safely contained in the Toxic Pop-Up Laundry Basket. One glimpse of the radioactive green is enough to warn all humans to keep a safe distance from the potentially harmful […]

With lots of candy-laden holidays such as Halloween, Christmas, Valentine’s Day and Easter, we often find ourselves baffled over how we possibly wound up with such a huge stash of candy. How about putting that pile of candy in an Arcade-Style Candy Grabber Machine?