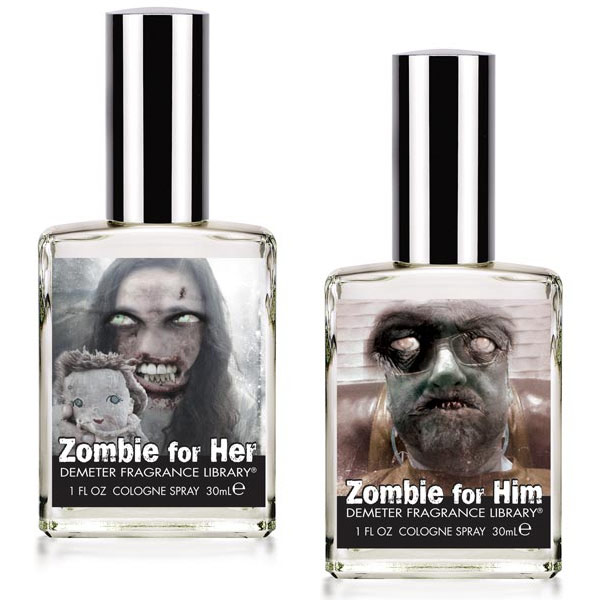 TV, movies, and common sense suggest the best way to survive a zombie apocalypse is to blend in by smelling like a rotting corpse and Zombie Perfume will help you achieve that, but you might have to decide on an active dating life or becoming zombie chow because the two goals might not be attainable with this stuff.

Even if the dead don’t start walking and munching on human brains, it could still be useful to smell like a cadaver every now and then. Stinking to high heaven could possibly even provide a little elbow room during the shopping chaos known as Black Friday.

Zombie for Him Perfume is a combination of dried leaves, mushrooms, mildew, moss, and earth. Basically, just go roll around in the woods for a little while and you’ll have an idea of what it smells like.

Zombie for Her Perfume is described as “a slightly lighter version of the Men’s fragrance with a touch of Dregs from the bottom of the wine barrel for that feminine touch.”

If the idea of smelling like a dead body is appealing to you then you need to keep a keen eye on the calendar when you shop for Zombie Perfume because the fragrances will only be available from March 15 to April 30.

Both Zombie for Him Perfume and Zombie for Her Perfume can be purchased in 1-ounce and 4-ounce bottles for $20.00 and $39.50 at Demeter Fragrance.

I like eating bacon just as much as anyone, but all these bacon products lately are getting a bit ridiculous. Take for example this new Bacon Unisex Perfume. I like to eat bacon, but I don’t want to smell like it (or be with someone […]