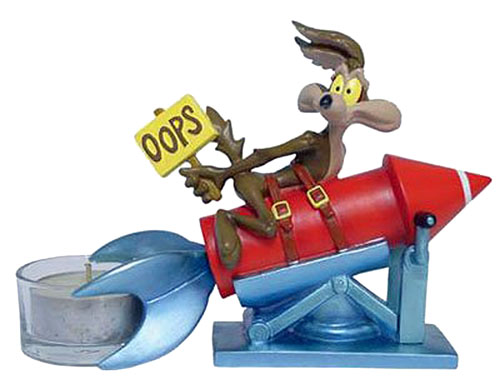 Out of all the different Looney Tunes episodes, the funniest ones are those starring Road Runner and Wile E. Coyote. Those two probably taught us at a very young age what TNT and dynamite are capable of. Acme brand, of course. To hang on to fond childhood TV memories when cartoons only appeared on Saturday morning, light a candle in the Wile E. Coyote Oops Tealight Holder and hope that the scrawny canine hangs on too.

They say that cats have nine lives. Well, that’s nothing compared to coyotes and road runners, who apparently have an infinite number of lives. In the Looney Tunes, Wile E. pretty much epitomizes the phrase “epic fail,” but you have to admire his will to never give up and his creativity in devising his naughty bird-killing schemes.

Looney Tunes Wile E. Coyote Oops Tealight Holder
Oops! He may be Wile E. Coyote, but wily he is not. Strapped to a rocket with that familiar expression on his face, Coyote is once again forced to flash the “Oops!” sign in this enormously entertaining Looney Tunes Tealight Holder from Westland Giftware. Play it smart. Order yours right away! Measures approximately 4 1/4-inches tall.

In real life, I think I heard that the coyote would actually outsmart the road runner. It would be interesting to put that theory to the test.

The Wile E. Coyote Oops Tealight Holder is available at Amazon and at Entertainment Earth. Hurry though, because the last Wile. E is about to blast off from Entertainment Earth for the low price of $19.99 with only one unit left in stock.

Batman comes out at night and patrols Gotham’s streets. Now let him watch over you at night with this Batman Glitter Globe Lamp. It depicts Batman leaping off his lamp while he beams light into your room. The glittering black base displays the Bat symbol. […]

Keep your desk neat and pristine by sticking all your junk into the Zombie Pencil Holder. If you’re all about scary, gory, and gross-looking stuff, then I’m sure you’ll like having this body-less object around. In keeping with its theme, you can poke the zombie’s […]

Business travelers and people on the go can always use and extra hand when it comes to holding things and that is exactly what the LugCup Portable Cup Holder does. Entrepreneur John Sparks knows how long road trips, long lines, and constant smartphone interruptions can […]

It’s really useful to have a place to keep your keys and mail so that things don’t get lost or misplaced. But just because it is practical, doesn’t mean it has to be lame. Instead, get this Zombie Mount Rushmore Letter and Key Holder. Just […]