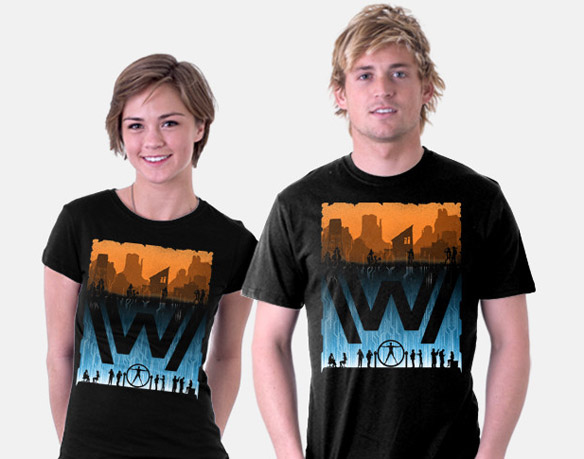 The world is filled with violent delights but the Westworld Go Between Worlds T-Shirt isn’t one of them so maybe you won’t have to worry about a violent end if you wear it.

Artist CoD Designs brings us an eye-catching image that reveals both sides to Westworld: the Wild West where Dolores, Maeve, and the Man in Black use six-shooters to uncover the deeper meaning of this futuristic amusement park, and the hi-tech labs and offices where Bernard/Arnold and Robert Ford spin their own webs of secrets and hidden agendas.

But the real question remains – will the shirt help you solve the riddle of the maze?

Probably not but it still looks awesome. 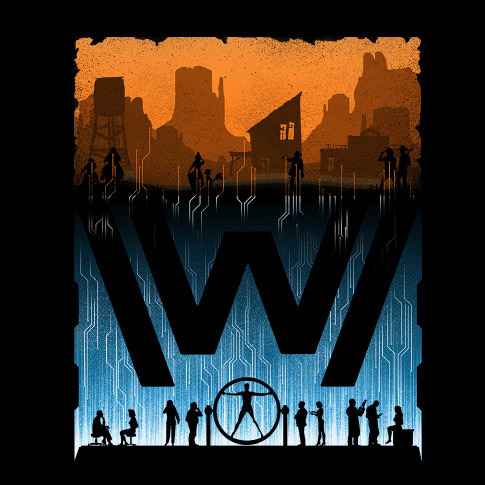 The Westworld Go Between Worlds T-Shirt is available for $20 at TeeFury.

Westworld ‘The Man in Black’ T-Shirt

You don’t need a cowboy hat or a six-shooter to enjoy Westworld. You just need this Westworld ‘The Man in Black’ T-Shirt. You also need to figure out something very important. Are you real or do you just think you are? Artist Wheels created this […]

This Westworld: Season 1 – Exclusive Milk White LP is a special treat for fans of HBO’s hit TV show. It has over a dozen songs from the show. The LP itself is milk white just like the goo in the vats that are used […]

When Worlds Collide: Doctor Who Meets Wizard of Oz T-Shirt

Ever wonder what would’ve happened if Doctor Who visited Oz? Well, it looks like Dorothy wouldn’t have to worry about a guilty conscience over killing a witch because the When Worlds Collide: Doctor Who Meets Wizard of Oz T-Shirt reveals that the Doctor beat her […]

Amusement parks with zombies is the insane idea behind the Walker World T-Shirt, with a lot of love tossed towards the classic sci-fi western, Westworld. In the 1973 movie, Westworld, androids at an amusement park glitch out and start killing the guests. Artist StationJack wondered […]

There’s art in chaos. There’s beauty in the abstract. And there’s certainly a bit of both in the works of art you can create with the Swirl ‘n Spin Art set. Just pour the paint, spin, and watch seemingly random splashes of paint come together […]

Switch Between Salt and Pepper Shaker

If you’re no good at beer pong, quarters, or chandeliers, you need a drinking game that doesn’t require any skill. With the Spin-the-Shot Drinking Game, things couldn’t be simpler. Just fill the shot glass, give it a spin, and whoever it points to has to […]

One of the coolest alien ships is also one of the oldest in Sci-Fi. The ships from War of the Worlds. They just look so alien and amazing, with a simple design. If you also love the design of these ships, check out this War […]

You’ll beam some serious out-of-this-world fashion into your life when you lock onto this Star Trek Explore New Worlds T-Shirt. Before J.J. Abrams created the Kelvin timeline, before Captain Picard ordered Earl Gray tea, there was Captain James T. Kirk and his 5-year mission to […]

We’ve seen before that you can get your own Full-Size Pac-Man Arcade Machine, that’s nothing compared to The Worlds Largest Pac-Man. This massive arcade game stands nearly 9 feet tall and features a humongous 108″ LED screen. It is basically like playing a video game […]