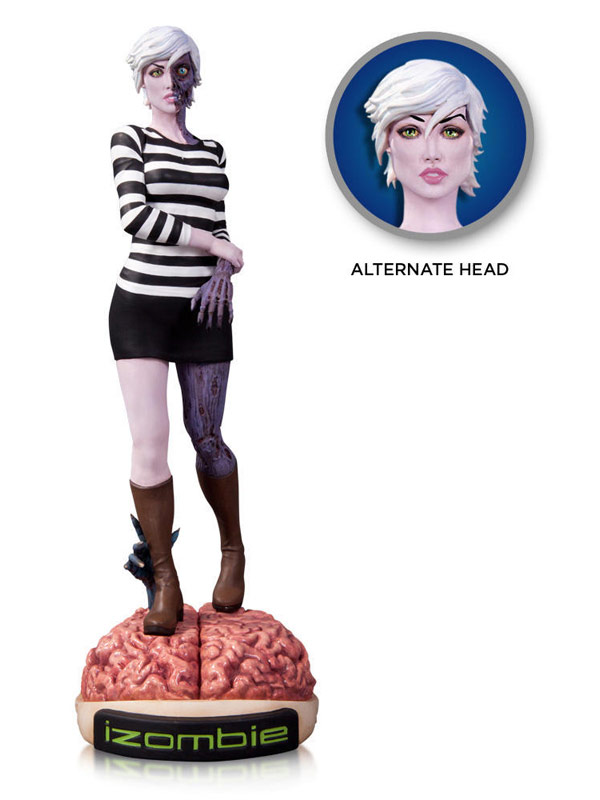 Meet Gwen. She might think you have a nice body but she mainly wants you for your brain. The Vertigo iZOMBIE Statue is the best type of zombie because you can bring it home without worrying about becoming somebody’s late-night snack.

Based on the character from Vertigo’s iZOMBIE comic book series and the art of Michael Allred, this approximately 9.5 inch-tall statue features Gwen, the main character of the comic book, with two distinct looks that highlight both her living and living dead appearance, with an alternate head that leaves out the zombie side. The figure stands on a creepy base that looks like a brain, with a hand busting out to grab Gwen’s leg.

Everything tastes better with hot sauce, right? Yes, and that even includes the grey matter between your ears on the iZombie Supa Hot T-Shirt. Liv Moore (best zombie name ever) eats brains on The CWs iZombie because her new zombie diet requires it. However, she […]

It’s no dream. Fans of Neil Gaiman can now use the Vertigo: The Sandman and Death Bookends Second Edition to make sure their beloved collection of Vertigo comic books and graphic novels are kept in great shape by two of Vertigo’s most well-known characters. The […]

You are what you eat and that goes double for the iZombie Olivia Moore with Brains Pop! Vinyl Figure. Olivia ‘Liv’ Moore has a secret. She’s a zombie. Believe it or not, the light hair and pale skin don’t give it away and she puts […]

Now you can relive your favorite moments from the hit show iZombie with this iZombie Liv Moore Action Figure. She is a doctor who became a zombie on the hit CW show iZombie. She solves crimes by eating the brains (and memories) of the victims. […]

Death is coming for you but it’s just the Vertigo Cover Girls 2nd Edition Death Statue, so don’t worry about putting your affairs in order just yet. Standing 11 1/2-inches tall and based on Neil Gaiman’s vision of Death in the Sandman graphic novels, the […]