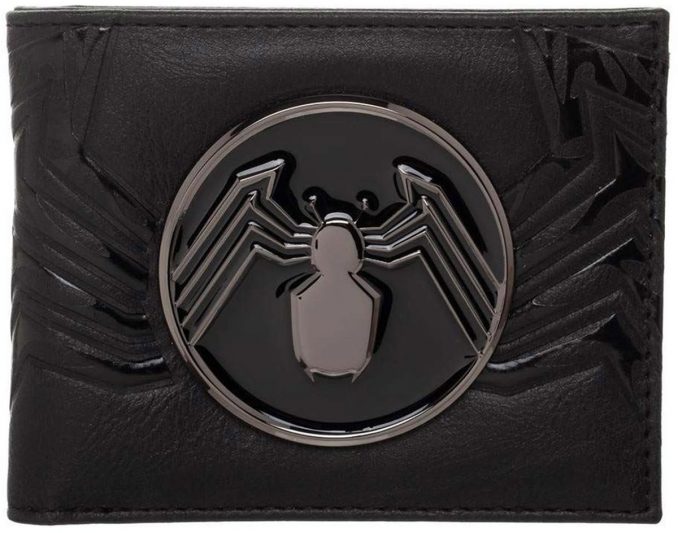 Fans of Venom, and anyone that loves spiders, will appreciate this sleek, black Venom Bifold Wallet. The front features an exquisite rendition of the Venom logo, while the inside has an ID slot, several slots for credit cards, and the main pocket to hold your paper money.

While Venom can take pretty much whatever he wants, I bet Eddie Brock still has to use that good old-fashioned money. That’s where this slick Venom bifold wallet comes in handy.

Just like any other bifold, this wallet can hold paper money as well as all your credit cards and I.D. Depicting Venom’s logo on the front, this wallet would not be hard to identify in a lineup. Coming in his signature black, you might feel the pull of the symbiote in your pocket.

Buy this Venom Bifold Wallet for $24.99 at SuperHeroStuff.

This Star Wars Imperial Bifold Wallet is cool enough for an Imperial officer or a Stormtrooper. The design is striking in red and black vegan leather. This bifold wallet has a metal Imperial logo in the center of one of the halves. Your Death Star […]

This Star Wars Mandalorian Bifold Wallet is exactly what Boba Fett uses to keep his bounty money safe and in one place. You can see why. It looks awesome. It is striking in grey and black vegan leather with a metal Mandalorian on one of […]

The new Venom Movie with Tom Hardy will be coming out in November. Related merchandise, like this awesome Venom Sinister Smile T-Shirt, will be a hot commodity. Officially licensed from Marvel, this Venom t-shirt features a big, toothy, frightening grin from Venom. His eyes are […]

Men of Steel need wallets of steel. Sadly they don’t make many metal wallets, but this Man of Steel Bifold Wallet will do just nicely. Whether you are a Clark Kent or more of a Superman, this wallet will hold all of your cash, cards […]

Everyone needs a wallet; even those of us short on cash. The Nintendo Controller Wallet is the perfect gift for adults and kids alike. Most of us grew up playing Zelda and Mario Brothers and still enjoy those classic on titles the Nintendo Wii system…I […]

Sony’s Venom Movie is out, and even though critics are panning it, audiences are loving it. It’s so popular that it blew away the previous opening weekend record for an October release. This means that items like this Marvel Venom Mask will be a very […]