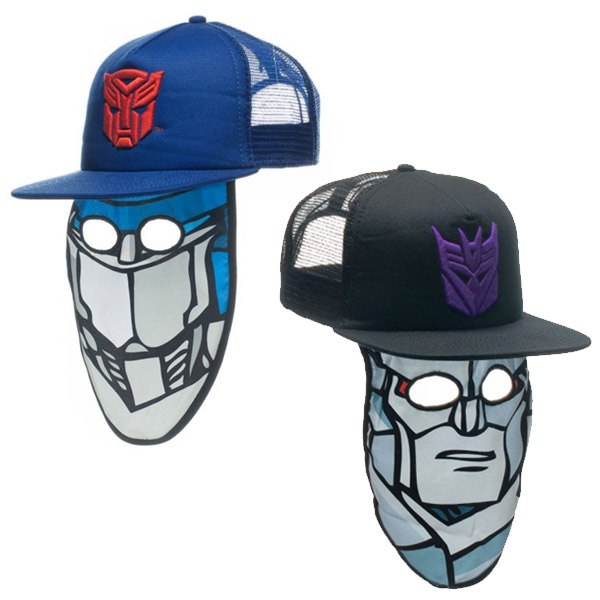 Do people give you odd looks when you say “Roll out” in a voice that sounds sort of like Optimus Prime? You can change that by wearing one of these Transformers Trucker Hats, because it makes sense for a trucker to say roll out, although you might still have to explain the funny voice.

These officially-licensed caps give you the ability to transform from human to Autobot or Decepticon… at least in the area of your face. When you’re not busy trying to either defend or destroy Earth, you can tuck the mask away and blend in with the humans.

It doesn’t matter if you’re walking to the Dark of the Moon or fearing the Revenge of the Fallen or just looking forward to the Age of Extinction, the Transformers Autobot and Decepticon iPhone 5 Cases will give a stylish out-of-this-world look to your iPhone […]

Celebrate Christmas with the autobots and decepticons by hanging these Transformers Ornaments on your tree. These robots in disguise are all about Christmas. You can choose from the Autobot or Decepticon ornament. Each features light up LED eyes so that they really look great on […]

I know summer is here and the cold nights are hopefully gone for a few months, but this Optimus Prime Transformer Hat was just too good to pass up. Available is sizes from infant to adult, there is more than meets the eye to this […]

When you want to hide, often the best tactic is to hide in plain sight. It is the concept that makes the Electric Outlet Wall Safe and D Battery Stash Box so effective. When it comes to the zombie apocalypse, hiding in plain sight means […]