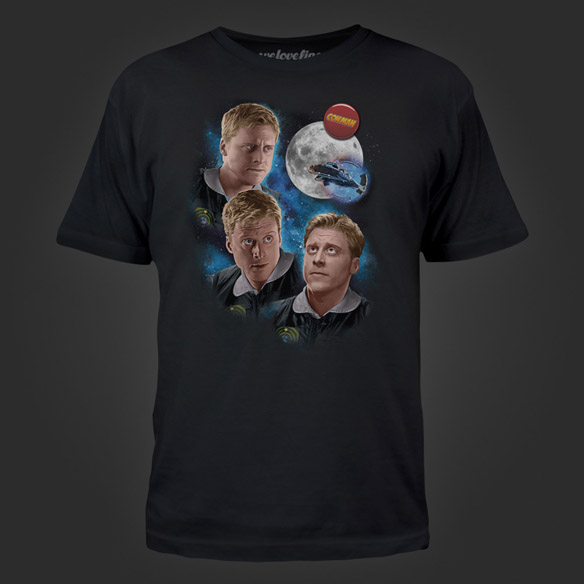 Fact, fiction, and a classic design collide on the Three Tudyk Moon T-Shirt, featuring the guy who is remembered as a character from a short-lived sci-fi TV series… but it’s not the guy you’re thinking of.

Alan Tudyk will always be known to browncoats as Hoban “Wash” Washburne in the Firefly television series, but he’s taking on a new role in Con Man, which follows the adventures and misadventures of an actor (Wray Nerely) working the convention circuit because he’s remembered as the spaceship pilot on Spectrum, a canceled science fiction series that went on to become a cult classic.

If that sounds vaguely familiar, it’s no accident, especially when you add in Nathan Fillion, who played the captain on both the real and the fictional TV shows.

Whether you’re a fan of the real Firefly or a future fan of the fictional Spectrum, this tee, based on the Internet-famous Three Wolf Moon shirt, is a must-have addition to your wardrobe.

The Three Tudyk Moon T-Shirt is available for $25 at WeLoveFine.com.

Nathan Fillion managed to become king of the geeks by basically being himself, making the I Wish This Was Nathan Fillion T-Shirt an obvious wardrobe choice for just about everyone because everybody wants to hang out with the man. Nate (I call him Nate because […]

Dean Winchester likes guys who say okie-dokie. He also apparently likes howling at the moon on this Supernatural Three Super Moon T-Shirt. And pie. Let’s not forget that Dead really, really, really likes pie. If you’ve spent any time at all online, there’s a good […]

The Three Grumpy Cat Moon T-Shirt combines two powerful Internet sensations together, so we need to cross our fingers and hope the world doesn’t explode. Once upon a time ago, Amazon began selling a Three Wolves T-Shirt, which by itself wasn’t that amazing because Amazon […]

An iconic shirt gets even more iconic with the Four Wolf Moon T-Shirt. If you’ve spent any time at all online then you’ve probably seen the legendary Three Wolf Moon shirt, along with variations that include Rocket Raccoon, Grumpy Cat, and Sam and Dean from […]

The classic Three Wolf Moon shirt gets a Guardian of the Galaxy twist with the Rocket Moon Trio T-Shirt, featuring everyone’s favorite lovable raccoon doing what he does best. We’ve already seen one different look applied to the popular wolf shirt with the Three Grumpy […]