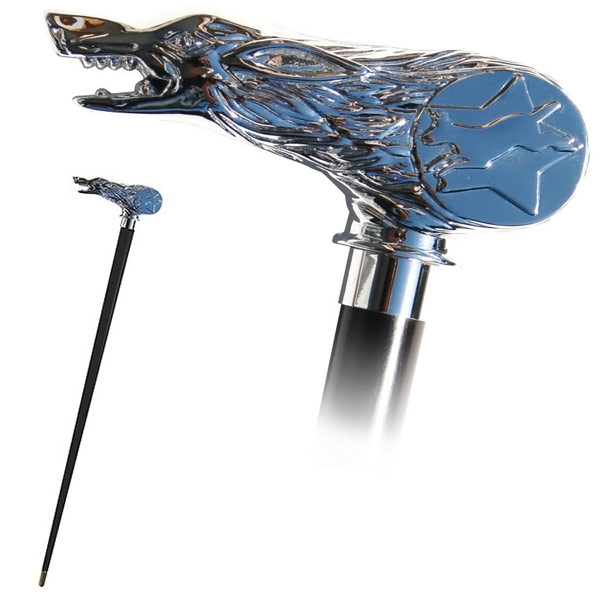 Fans of Lon Chaney Jr.’s original Wolf Man will be howling to get their paws on the Universal Monsters The Wolf Man Larry Talbot Cane Prop Replica.

You won’t have to worry about transforming into a hairy, bloodthirsty animal when you make this cane your own but you might feel a little nervous when the full moon rises in the night sky because of how film-accurate this walking stick is, and there’s a very good reason for that: The prop replica is based on the original sculpt by Ellis Burman that was used on the set of 1941’s The Wolf Man.

The wood cane, which is part of a 400-piece limited-edition run, measures 38-inches and features a 7-inch-long, 4-inch-wide, chrome-plated wolf-head handle that probably shouldn’t be used to attack werewolves since it’s not real silver.

The Universal Monsters The Wolf Man Larry Talbot Cane Prop Replica will be available December 2013, but even a man who is pure in heart and says his prayers by night can pre-order it now for $398.99 at Entertainment Earth.

You usually don’t expect the Clown Prince of Crime to actually help you but the DC Gallery Joker Cane Prop Replica does provide a little extra support, along with a whole lot of style. He’s got the green hair, killer smile, and eye-catching purple suit, […]

Holidays are a time for fun and celebration with family and friends…and of course that usually means alcohol is involved. The peppermint flavored Candy Cane Shot Glass should be a big hit, as long as you enjoy candy and alcohol…What’s better than an edible shot […]