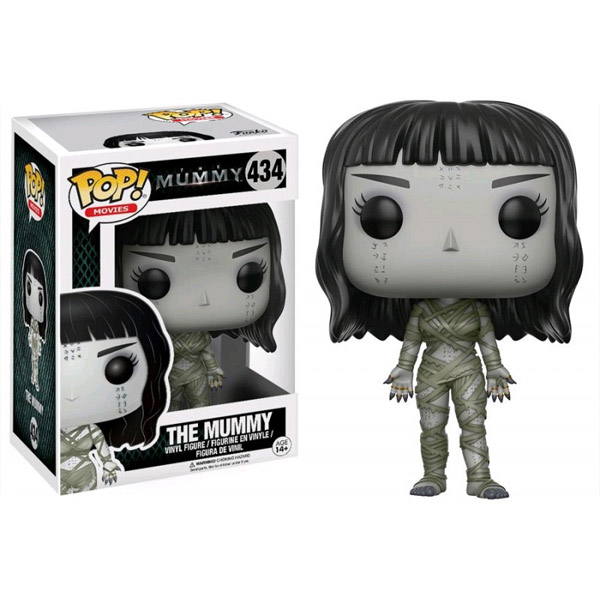 A classic horror icon is given new life with The Mummy 2017 Pop! Vinyl Figure.

Whether you’re talking about Boris Karloff’s classic monster or Arnold Vosloo’s sandy antagonist who squares off against Brendan Fraser, one thing has remained the same – the mummy is a dude.

But this is the 21st century and women should be allowed to unleash untold levels of death and destruction, too, which brings us to this cute 3 3/4-inch-tall vinyl figure based on Sofia Boutella’s mummified Princess Ahmanet in the new movie, The Mummy, who is strong enough to withstand even the supernatural force of Tom Cruise’s smile.

Get wrapped up in great prices for Mummy merchandise at Rout.com.

Tom Cruise gets Popified with The Mummy 2017 Nick Morton Pop! Vinyl Figure, which is a lot more fun than getting mummified. Based on Cruise’s killed-and-back-from-the-dead character in 2017’s The Mummy, this approximately 3 3/4-inch-tall figure is ready to do battle with The Mummy 2017 […]

No, the Crawling Mummy Hand with Sound isn’t Thing from the popular animated series and movie Addams Family, but it sure looks like it. This is the thing to have when you want to freak people out by making them think that things are going […]

Mummies are usually wrapped from head-to-toe in gauze and bandages but the Bone Collection Mummy Wrap Headphone Cord Organizer lets the classic horror character get wrapped up in something a little more practical, providing a touch of humor and organization to your day. The environmentally-friendly […]

Remember the Mad Devil USB Flash Drive that we wrote about late last year? It turns out that he’s got a mummy cousin that can carry up to 8 gigabytes of your most important files.

I can’t cook a boiled egg, but I know that some people are real monsters in the kitchen. For those people who want to have a monster mash in the kitchen, check out this Mini Mummy & Monster Spatula. It’s perfect for Halloween or whenever you […]

These Supernatural Vinyl Pop Figures from Funko’s Pop! line let you choose from Sam, Dean, or Crowley. Sadly they don’t come with a tiny Chevy Impala. Relive their adventures with these cute tiny figures as you make them hunt demons and other supernatural entities. Supernatural […]

Come 12-21-2012, this Wrapped Too Tight Garden Mummy Statue probably won’t be the scariest undead thing in your yard, but he’ll go nicely with the Skel-E-Gnomes for now. Measuring just over 21 inches tall, this hand-painted statue can be placed almost anywhere in the yard […]

Doctor Who Are You My Mummy T-Shirt