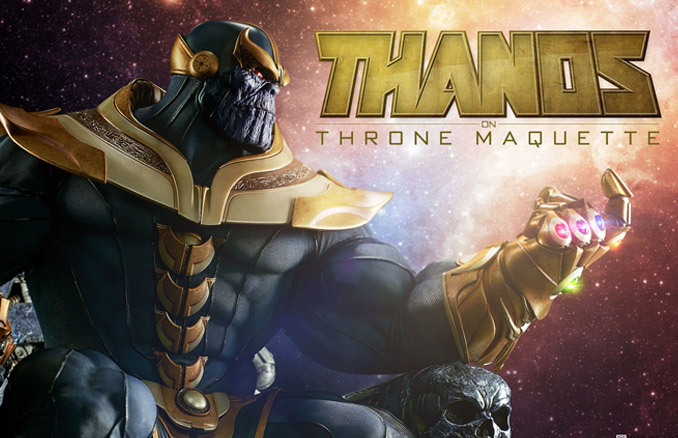 The Mad Titan of the Marvel Universe takes a seat with the Thanos on Throne Maquette.

He might have the face of a raisin, but Thanos is a character you do not want to mess with. In addition to being a powerful Titan with near-godlike abilities, he also has a major thing for Mistress Death, who he seeks to impress by killing as many people as possible. Also, for a short time, he wore a tiny bauble known as the Infinity Gauntlet, powered by five Infinity Stones that gave him power over everything.

This 22 1/2-inch statue features the arch-nemesis of the whole Marvel universe sitting upon his throne, wielding the power of the Infinity Gauntlet to shape the universe as he wishes it to be… but one question remains – who would win the battle of the uglies if Marvel’s Thanos went toe-to-toe with DC’s Darkseid?

You don’t need an Infinity Gauntlet to find discounts on Thanos merchandise. You just need Rout.com.

Marvel’s Mad Titan wields power over infinity on the Thanos on Throne Variant Art Print. The purple powerhouse with a crush on Death has come a long way since his first appearance in Iron Man #55 back in 1973. He’s been a villain and a […]

These Marvel Infinity Gauntlet Stud Earrings look Marvelous. You get a pair of Infinity Gauntlets loaded with Infinity Stones. Now you have the power. They are made from 316L surgical-grade stainless steel and are a great way to accessorize with Marvel. Perfect for the geek […]

Reality, power, space, time, the mind, and the soul are yours to control with the Infinity Gauntlet Handchain. Okay, this bracelet/ring/chain combo won’t actually let you control the elements of the universe but it will give you complete mastery over style and fashion… and Thanos […]

You don’t need control over Time, Space, or any of that other stuff to pop open a cold one; the Marvel Infinity Gauntlet Bottle Opener is all that’s needed to get the job done. Thanos the Mad Titan has never been what you might consider […]

Wield the power of the infinity gauntlet with the Thanos Infinite Power Hoodie. Time, Space, Mind, Soul, Reality, and Power find a new home on your back (or your chest) with this 80/20 cotton/poly blend hoodie that features Thanos wielding the infinity gauntlet. He’s smiling […]

The powers of Mind, Soul, Power, Space, Time, and Reality are waiting to be wielded by the Marvel Thanos Fine Art Statue. Determined to win the affection of Death, the purple-faced villain of the Marvel universe collected six stones of power to create the all-powerful […]