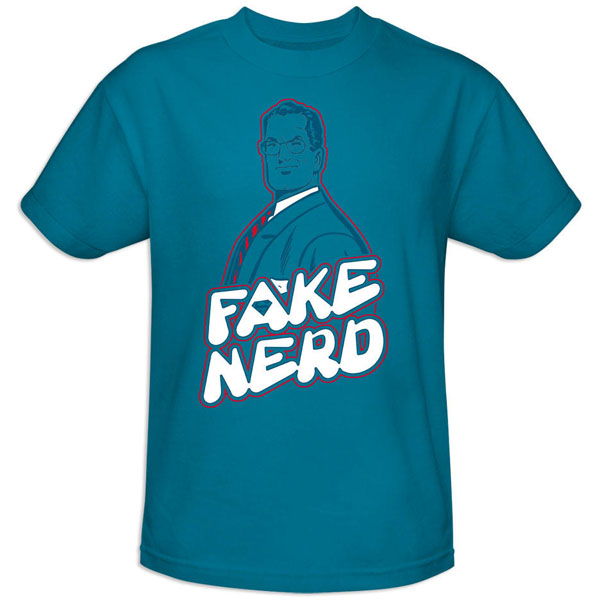 It’s cool to be a nerd or geek these days so a lot of people are grabbing glasses and pocket protectors to fit in, but one person was rocking the four-eyed look before it became popular. The Superman Fake Nerd T-Shirt features the man of steel in disguise as mild-mannered reporter Clark Kent, with a retro look that suggests this was Clark when he was a nerd of the highest degree, acting like a wimpy guy who avoided any and all physical altercations to hide the fact that he could bench-press the Daily Planet.

Clark has gotten a little more modern (and cooler) these days but he still holds a special place in our hearts for being one of the first fake nerds, and you can celebrate that iconic moment with the Superman Fake Nerd T-Shirt for $24.95 at WBShop.com and $20 at Superherostuff.com.

Here are some awesome fake dentures that will make you look like a dweeb, a vampire, an old man, a supermodel, and all sorts of creepy. The Gnarly Teeth Fake Dentures will transform your plain and normal look to something that still looks like you, […]

The life of a nerd can be hard sometimes because it’s not easy to display all that hard-won nerd knowledge that’s been acquired through sleepless nights of gaming and weekend binges of cult TV shows, but the Decorated Nerd T-Shirt makes showing off all those […]

What if you could dress up as both Superman and Clark Kent in one costume? Well, now you can. This Superman / Clark Kent Reversible Costume is awesome. Why choose one when you can be both versions of Krypton’s last son? This 2-in-1 costume will […]

Stressed and faced with a lot of crap at the office? Then take it out on the crap itself through the Fake Poop Stress Toy. Your colleagues might probably think you’ve gone bonkers and lost all sense of hygiene when they see you squeezing the […]

While the Dream Chaise Lounge Chair offers total comfort and relaxation, the modern styling might not complement the feng shui of your garden. However, the aesthetics of this Cricket Forge Leaf Bench and Table Set should allow for perfectly balanced qi. Or maybe they just […]