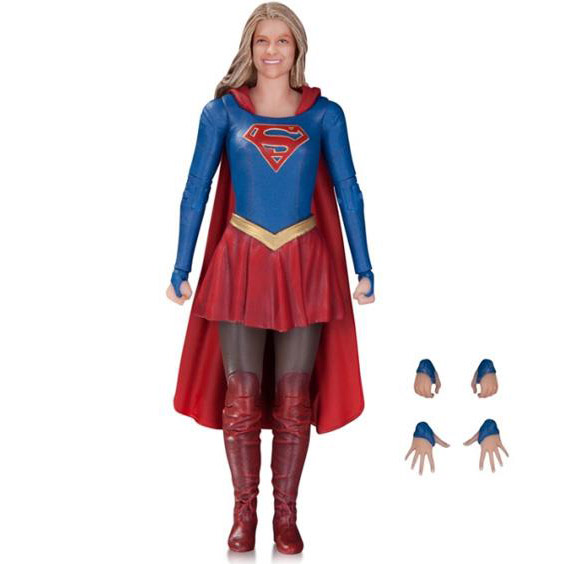 Look! Up in the sky! No, it’s not the big guy. It’s the Supergirl TV Series Action Figure.

She doesn’t have any grimdark vigilantes asking her if she bleeds but the former CBS (now CW) superhero does have a Martian Manhunter that she bickers with. And Cat Grant. Yeah, life is rough.

Based on Melissa Benoist’s portrayal of Superman’s cousin, Kara Zor-E, this 6 3/4-inch figure features Supergirl’s iconic costume and interchangeable hands for the character.

The Supergirl TV Series Action Figure will be available June 2017 but it can be pre-ordered now for $23.99 at Entertainment Earth.

Kara Zor-El, the Girl of Steel, is flying high on the Supergirl TV Series Endless Sky T-Shirt. While her cousin is mixing it up with some vigilante in Gotham City, Supergirl is rubbing elbows with the likes of Martian Manhunter and the Flash. At least […]

The Supergirl TV Series Q-Fig PVC Figure features the girl who was rocketed away from an exploding Krypton to keep an eye on her cousin, Kal-El. Fans of the CW’s Supergirl know that Kara Zor-El’s baby-sitting duties didn’t go exactly as planned, with Kal-El being […]

The Girl of Steel tries three poses with the Supergirl TV Series ArtFX+ Statue to find out which one appears more intimidating to the bad guys. Personally, I think being able to set someone on fire with your eyes is intimidating enough. Standing approximately 6 […]

It’s time to get super retro as the Man of Steel joins forces with the Girl of Steel in the Superman and Supergirl 8-Inch Action Figure Set. You’ll feel like you took a Kryptonian rocketship back through time when you get your hands on these […]