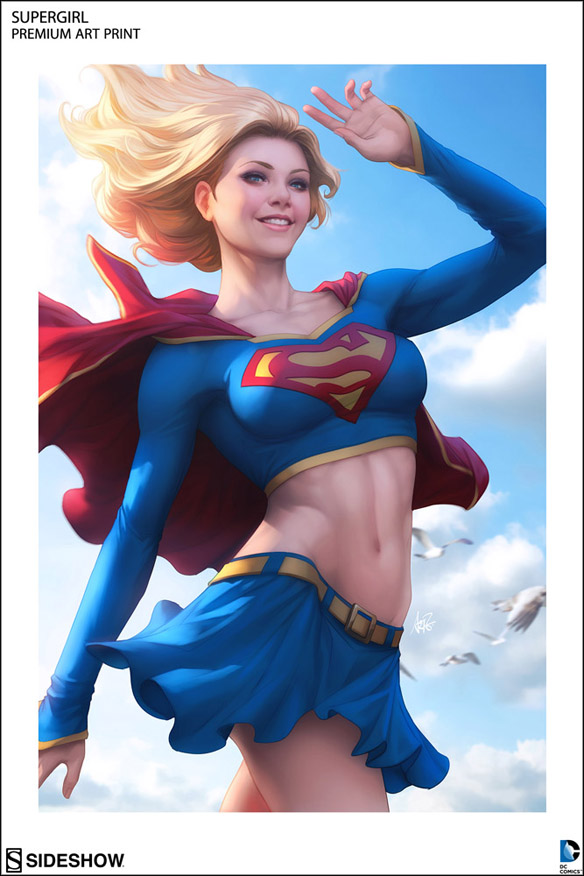 Is the Girl of Steel feeling blue in the new Supergirl Premium Art Print created by Stanley ‘Artgerm’ Lau?

Naw, Kara Zor-El isn’t feeling down in the dumps but her wardrobe might look a little odd to some people because Mr. Lau decided to show Supergirl as she appeared before the New 52 reboot (and TV series), which featured a blue skirt, a blue top that showed off her abs of steel, and a red cape trimmed in gold. We need to be thankful that he didn’t go with 1980s Supergirl because she wore a headband, which was just weird.

The 18″ x 24″ print is limited to just 350 pieces and is available either framed or unframed.

The Supergirl Premium Art Print will be available Mar 2016 – Apr 2016 but it can be pre-ordered now for $240 at Sideshow Collectibles.

The Girl of Steel and the Feline of Steel soar through the sky on the Supergirl Premium Format Figure. Standing 24-inches tall and based on this poster by Stanley “Artgerm” Lau, Supergirl is ready to brighten everyone’s day with a friendly wave, and Streaky the […]

Are you a sporty geek who likes to wear headbands and listen to music while working out? If so, you’ll like the Earphones Headband that streamlines your athletic look and on-the-go audio logistics.

Mullet on the Go Headband

As atrocious as the mullet is, I’m still seeing the hairstyle worn on both men and women on the streets today. Even with all the jokes and ridicule about the mullet, you’d think that people would be ashamed of sporting the look. Simply not the […]

Fans of the cleavage-baring alternate Supergirl of Earth-2 will love this Power Girl Premium Art Print by the talented Stanley ‘Artgerm’ Lau. Forced to give up her Supergirl persona when she discovered the name was already taken, Earth-2’s Kara Zor-L became Power Girl, a Kryptonian […]

Around this time of year as winter creeps in, there seems to be more days when it feels like you’ve been punched in the head (or wish that someone would hurry up and knock your lights out.) Before these days get the best of you, be prepared by wearing the POW! […]

These mighty mutants are feeling golden with the X-Men Gold Team Premium Art Print. The X-Men have an impressive list of members to juggle so it was easy for characters to occasionally slip through the cracks and not get the love they deserved. In an […]