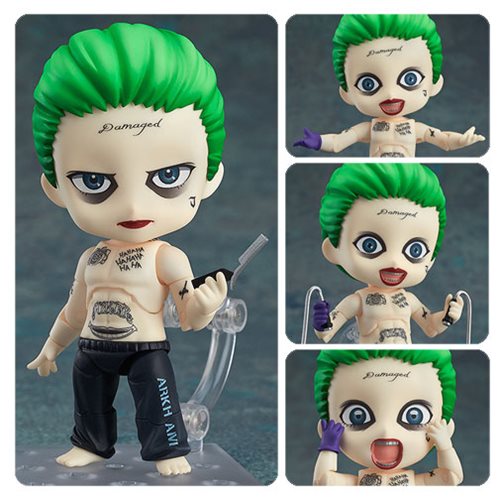 This fully articulated character even features electroshock tools and a razor. You can pose him any way you like. The Joker has his purple glove and tattoos, just like in the Suicide Squad movie. He stands just under 4-inches tall.

Only $44.99 from Entertainment Earth. Pre-order him now for April.

Let your inner Clown Prince of Crime out to play with the Suicide Squad Joker Tattoos T-Shirt. You don’t have the pasty white skin, the emerald green hair, or the jacked-up teeth but this 100% cotton tee lets you share the Joker’s passion for ink, […]

Ready to die laughing? The Suicide Squad Shirtless Joker Pop! Vinyl Figure has a few jokes that will literally kill you. Not everyone is thrilled with Jared Leto’s vision of the Joker in Suicide Squad but even his haters have to admit that he makes […]