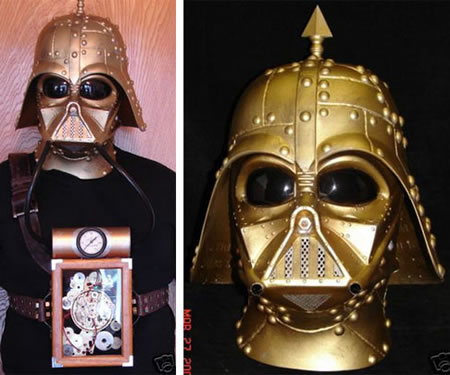 This impressive steampunk Darth Vader helmet, now up for sale at eBay, has been created by modifying an old mask that was bought at Disney World.

This vader mask was sitting on my shelf for about 14 years. It was originally purchased for me on my first trip to Disney World. Rather than get rid of it, I decided to have a little fun with it. I was inspired by some art from the Vader Project, and some other cool steampunk Star Wars stuff I found online.

The current bid for the Steampunk Darth Vader Mask is $31.

(The Official Star Wars Blog via Gizmodo and Nerdcore)

There’s just something about steampunk that just totally grabs my eye. Maybe it’s the cool, offbeat designs, or the out-of-this-world way they portray seemingly ordinary objects. I mean, just take a look at this Steampunk Robot and the Gears of Time Wall Clock. And there’s […]